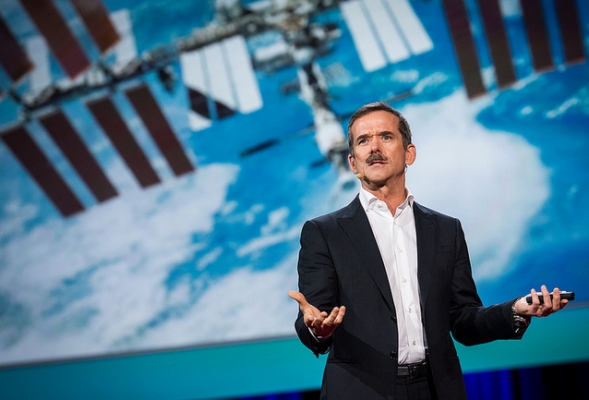 Chris Hadfield's TED Talk is not only an incredible recollection of space exploration from one of the very few living people to ever venture beyond our own planet, but it is also a significant discussion on understanding the true nature of fear.

Chris presents the common example of a spider: while many people fear every interaction that they have with a simple spiderweb, the reality is that the vast majority of spiders that we encounter are statistically harmless. However, our fear changes our actions, not in response to true danger, but instead in response to a false belief.

It is in this simple understanding that both space exploration and day-to-day life reach a profound intersection. Chris, returning to the spider metaphor, suggests walking into spiderweb after spiderweb in order to fundamentally understand that they are not as dangerous as our emotional reaction implies. It is this mentality that allows us to both see the truth in our own fear and prepare ourselves for true dangers.

Blind and Fearless in Space

The culmination of this metaphor is represented by a single moment in time: Chris found himself completely blinded while on a spacewalk. With a mere drop of fluid in his eyes, his tear ducts began to overflow in order to remove the threat. However, in zero gravity, this means that the tears welled up and stuck to his eye, soon to bridge over his nose and cover both eyes in liquid. This resulted in complete blindness while holding on to life and humanity by a single hand.

However, fear played no part in the spacewalk. By having trained for the true dangers of the spacewalk, Chris knew his available options and acted accordingly. Chris's talk is an immaculate explanation of why the only thing we have to fear is fear itself.

Feral Pigs in British Columbia Can Be Hunted 24/7