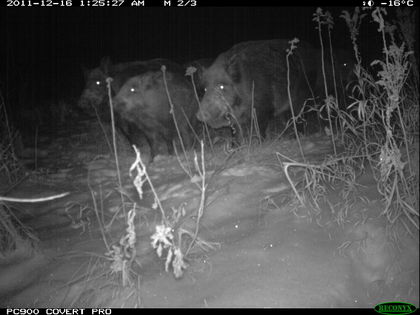 Feral Pigs in British Columbia Can Be Hunted 24x7
[/caption]Feral pigs have literally gone hog wild in this province and will now pay the ultimate price. Today, the Ministry of Forests, Lands and Natural Resource Operations has placed the wild hogs on the "Schedule C" of exempted animals IE designated them as problem or invasive species. This allows any licensed hunter to take them down 24x7, no questions asked. The shoot to kill order is the result of the havoc the feral pigs are wreaking the environment by destroying crops and local vegetation, eating ground-nesting bird eggs, and increasing the spread of parasites and viruses via their fecal matter.

It is believed the troublesome hogs were once farm livestock that managed to get free and adapt to the wild. Now, they have an environmentally significant presence in the regions of Kamloops, Peace, Okanagan, Kootenay, and the Lower Mainland. As a result, locals and hunters can extricate them at will all the livelong day if desired as long as they have a valid hunter’s license.

It should be noted that the ministry is acting swiftly and proactively to deal with the feral pig problem. They haven't reached the point of overrunning the eco system yet. However, they have precisely that ability if left unchecked. The "Schedule C" designation in effect deputizes hunters in an anti-pig posse to reduce the feral pig population before it undergoes a growth explosion. The ministry made it clear that should the pig population reach that point, extricating them from the province will be a costly and difficult process.

Other species having bred themselves onto this most ignominious excrement list are the Rana clamitans or green frog, every species of the family Chelydridae or snapping turtles, Didelphis virginiana or North American opossum, Sylvilagus floridanus or eastern cottontail, and the Oryctolagus cuniculus or European rabbit to name a few.