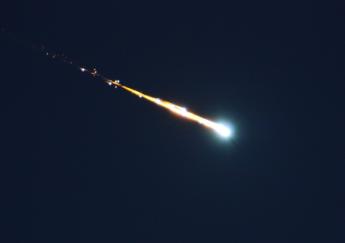 A second fireball has struck another part of Canada after one was just seen yesterday in the Maritimes region. The latest fireball was viewed by many people but in various ways. According to the first witness who saw the fireball over Nova Scotia, it entered slowly and then disappeared on the horizon. On the other hand, a different witness claims the fireball continued on for nearly seven seconds until it burst into several pieces before it disappeared.

Stephan Lukas stated he's witnessed shooting stars before. In fact, he claims he sees one almost every month and thoroughly knows what they look like.

A third witness, Nigel Service, told a local Canadian news channel he witnessed a small white light. However, he didn't think much about it since he thought perhaps the light stemmed from a new set of city lights just installed in the surrounding area. A few people in Maritimes believed the light actually emanated from the International Space Station but Nigel maintained it did not.

After hearing the descriptions of the witnesses, an astronomer named David Lane, came to the conclusion that the light was either a genuine fireball, or an extremely bright meteor that shot across the sky.

When a meteor enters the earth's atmosphere, the friction causes it to burn and will therefore produce an intense white light for some time after. However, it will indeed eventually burn out upon entering the atmosphere. If the witnesses are accurate in their observations, then the ball was in fact colorful. When the sightings were witnessed in both Maritimes and Nova Scotia, it was close to 5 am in the morning.

On The Web:
People in Canada Witness Second Fireball on Wednesday Morning
http://frenchtribune.com/teneur/1422065-people-canada-witness-second-fireball-wednesday-morning

Related Topics:Second fireball seen in Canada on Wednesday
Up Next

Fines Could Increase For ‘Dooring’ Cyclists