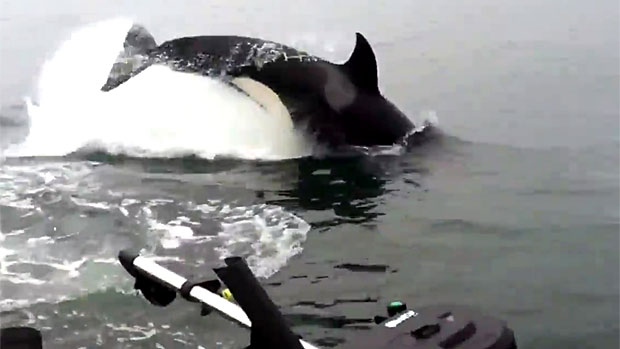 lions off the coast of Prince Rupert in the Canadian province of British Columbia. News of the video was posted on Canada's CBC website.

A Canadian sports fisherman named Travis Twizell was responsible for capturing this amazing footage. In the video, several sea lions, of both sexes and all ages, are shown making a bid to elude the pursuing killer whales by using Twizell's fishing boat as a shield.

Twizell maneuvered the boat close to the sea lions, in order to capture their movements in his video, not realizing there were orcas nearby as well. Unfortunately for the sea lions, Twizell appears to move his boat out of the way in order to avoid being capsized by the angry orcas. In the end, this spells doom for at least one sea lion, which is surrounded by victorious killer whales, killed, and devoured.

Such sightings are far less common than one would think. According to the Cetacean Sightings Network, which is maintained by the nearby Vancouver Aquarium, Twizell should be commended for capturing such a rare view of wild nature.

The footage is very raw, and contains instances of language usage which may not be deemed "family friendly" for all audiences. However, for those who wish to see such scenes of nature taking its course, the Youtube video is highly recommended.

Travis Twizell had this to say concerning his unusual experience: "We noticed the killer whales around and then the sea lions moved toward us and they all just started circling. Killer whales were right beside you. A few times there when they jumped you could have reached out and touched them. Everybody was just in awe, it was just unbelievable.”