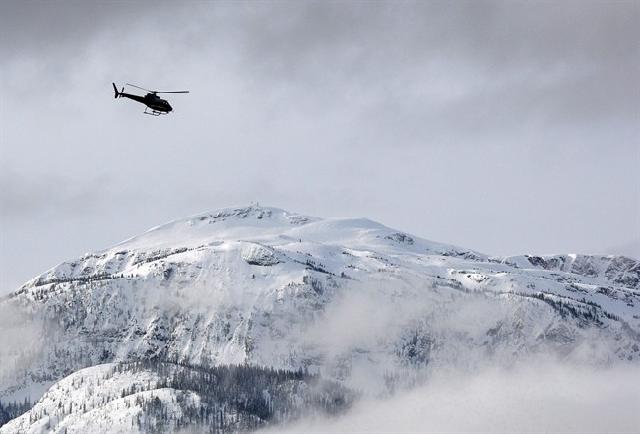 A search and rescue helicopter heads to an avalanche site near Revelstoke, B.C. in a 2010 file photo. THE CANADIAN PRESS/Jeff McIntosh
[/caption]Canadian Avalanche Fatalities Continue With Revelstoke Death

An avalanche that struck the region north of Revelstoke, B.C., has proven fatal to a skier visiting Canada from Germany. The 45-year old man was killed when he was buried under an estimated three meters of snow after being in the wrong place at the wrong time when the morning avalanche occurred. Authorities say that this latest fatality brings to nine the number of avalanche victims this winter in Alberta and British Columbia.

Although other skiers who witnessed the man get caught up in the snow slide were able to dig him out as quickly as possible, he failed to respond to emergency medical treatment. He died as a result of his injuries. The dead skier has yet to be identified pending notification of his family members. Canadian Mounties report that the coroner has taken over the investigation of this latest death due to avalanche.

The German skier is the latest snow sports enthusiast to be caught unaware in one of the worst avalanche seasons on record. Other fatalities this winter include a father and son who did not head posted warnings to avoid back country areas at high risk for avalanche activity, along with hikers, adventurers on snowshoes, snowmobilers and skiers who ventured off the trail. Canadian authorities have been more vigilant than ever this year in mounting public awareness campaigns that certain outdoor areas carry a heightened risk of danger due to the possibility of avalanche. In nine out of ten cases, a person in the area can be directly linked as the cause for the snow to begin sliding. An estimated 150 people are killed annually around the world due to avalanche activity.