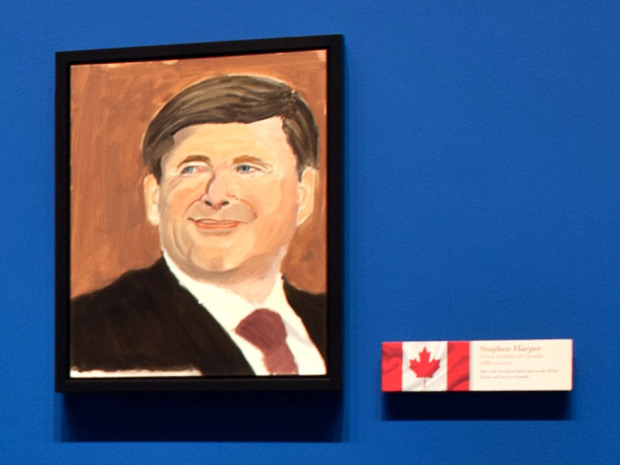 Dallas, Texas - Former US President George W. Bush kicked off his first art exhibit as a painter this past Friday at his presidential library. The exhibit, entitled "The Art of Leadership: A President’s Personal Diplomacy", features numerous portraits of world figures including former British Prime Minister Tony Blair and Russian strongman Vladimir Putin.

Bush has also painted our very own Stephen Harper.

As the Globe points out, Bush appears to have taken his inspiration from Harper’s Wikipedia page, which has a 2010 photo of the prime minister in Davos.

Harper’s wearing a similar tie in both the photo and the painting. He’s also turned in the same direction and has a nearly identical grin.

The photo has been attached to the prime minister’s Wikipedia profile since January 2010. Notably, it’s the first result when you do a Google image search for “Stephen Harper.”

During a candid interview with his daughter Jenna, now an NBC news correspondent, Bush was asked what he believed the heads of state might say upon viewing their portraits. He wryly said that he believed they would be impressed at the fact that he was a bona fide painter.

The former first couple took part in the interview and former First Lady Laura Bush quipped that his painting of her definitely stood in need of improvement. Bush followed up that painting his wife was probably not a task he would undertake again. None of the people he painted were aware that he was doing that.

In his trademark self-deprecation, Bush believes that their first thoughts might be that he would have sketched a stick drawing of them and labeled it as art. Some of his private or personal artwork was made public after hackers got into his personal e-mail account and obtained the photographs. When asked about the incident, the former president was obviously bothered about the invasion of his privacy.

George W. Bush had to deal with an excoriated political Left in this nation during his entire two terms in office. The Democrat Party never got over his narrow victory in the 2000 presidential election and his party's historic mid-term victory in 2002. The media often portrayed him unfairly as lacking intelligence or feigning his cowboy persona. He has experienced a resurgence of popularity with young people with his embracing of social media in recent years. Source:
An Artist on His First Exhibit: ‘Wow, George Bush Is a Painter’
http://www.nytimes.com/2014/04/04/us/politics/an-artist-on-his-first-exhibit-wow-george-bush-is-a-painter.html?_r=0

George W. Bush reveals painting of Stephen Harper, which he seems to have copied from a Wikipedia photo
http://news.nationalpost.com/2014/04/04/george-w-bush-reveals-portrait-of-vladimir-putin-says-art-was-inspired-by-russian-leader-dissing-the-size-of-his-dog/

Too Much Texting Could Be Harming Your Dating Mojo