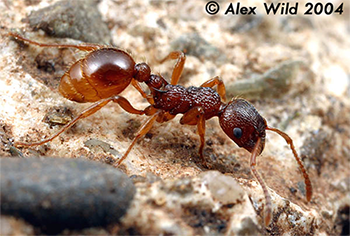 The European fire ant, Myrmica rubra, was first recorded in BC in 2010 and has since been confirmed in several isolated locations in Vancouver, North Vancouver, Burnaby, Richmond, Chilliwack, Victoria and Courtenay. The fire ant is likely to occur in other neighbouring municipalities. The species is native to Europe and Asia and was first introduced to eastern North America in the 1900s. Over the past ten years it has become a significant pest in a number of states in the US and Canadian provinces. European fire ants prefer moist environments, making irrigated lawns and gardens on the West Coast of BC an ideal place to become established.[/caption]

Among 24 Metro Vancouver areas to be affected in recent years, the centre has dealt with this issue since August 2013. They have had limited success eradicating their tenacious foe; however, their efforts have resulted in at least limited control over the fire ants invading the property.

In an effort to halt the invasion, the garden centre has removed greenhouses as well as using bait and traps. Currently, they feel confident that their plants are safe for customers to purchase, although it is always recommended that caution be used when planting or re-potting in areas with known fire ant issues.

This caution is especially warranted due the severity of fire ant bites and because the insects have a remarkable tendency to aggressively swarm anyone or anything that disturbs their often-huge underground nests. This includes children and household pets that may inadvertently dig in areas where they have formed colonies.

Bites and stings from fire ants, which the Mayo Clinic puts on par with a scorpion sting, are characterized as extremely painful, itchy and slow to heal, producing sizable red welts that remain visible for days, if not longer. Allergic reactions are also possible, so sensible individuals should exercise even more caution.

GardenWorks reports that several staff members have been bitten or stung during their course of their work, as well as one member of the public who was bitten while handling potted plants.

Currently, no single intervention has been shown effective in removing fire ants or even killing them, but it is something that researchers, gardeners and others are continually working to remedy. Using bait to lure colonies into a large-scale, sophisticated trap is one avenue that is being explored. This is one of the most common and widespread Myrmica species of the Palaearctic. Occurs in the region stretching from Portugal to East Siberia (till Transbaikalia), and from northern Greece to the forest-tundra natural zone in the North.[3] It is also currently invading Japan and North America where they are considered a nuisance as it is an invasive species.[/caption]