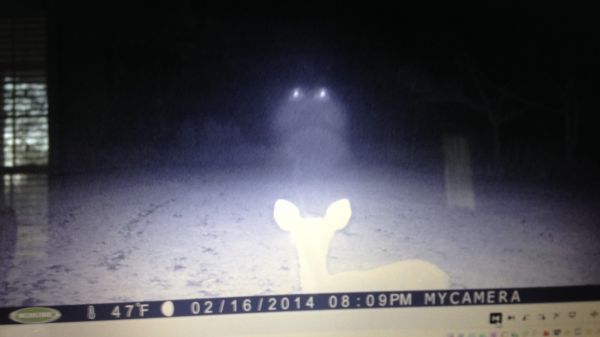 In Jackson County Mississippi, April 4th, 2014, Rainer and Edith Shattel noticed some unusual footage when viewing their infrared camera recordings. Normally, they leave the cameras setup to keep an eye out for their grandchildren and local wildlife; however, last Friday they found a little more than they were expecting. During the night, what appeared to be three unique instances of unidentified flying objects (UFO’s) passed through the camera’s recording field.

The UFO, evidenced by mysterious lights, first illuminates some grazing deer though there is no light in the meadow surrounded by heavily wooded area.

According to WLOX, the light begins dimmer and becomes brighter over the course of several minutes.

After a few more minutes a second light appears and looms closer. The second light appears to be headlights, but it is visible a considerable distance from the ground. There are no roads in the area so it is improbable that the lights are caused by a standard vehicle. At another point, a different deer appears to be staring directly into a light from a third undetermined source.

The Shattels’ have enlisted the aid of their friends and neighbors to try to discover what caused the lights that night. Rainer has indicated that he isn’t certain that the UFO is alien related, and that it may very well be a government drone or from some other similar source.

They wish that the creator of the light source would identify itself to help resolve this exciting mystery, but they are not expecting that the puzzle will be solved. They are highly fascinated regarding the fact that it happened on their own 150 acre piece of land. Rainer states “It adds a little flavor to life, I guess you could say”, and they are not worried about their safety but instead are still enjoying the quietness of country living.
What do you think it was? Watch footage of the mystery in the video above.

According to an annual survey, 1,180 UFOs (Unidentified Flying Objects) were seen over Canada last year, down from nearly 2,000 sightings in 2012, but still an impressive overall number of accounts.

Recent increases in UFO sightings are attributed to the ease of making reports them through the Internet, in addition to an increase of general interest in space and related topics. Very few reports include any encounters with alien life forms; however, each year there are several reports of abductions or similar circumstances, although the credibility of such is often questionable. Sightings of UFOs themselves are often made by people of good judgement and steady character, including people from many vocations and walks of life.

In terms of the sightings themselves, the 2013 observations were most often in the form of lights in the sky at night or of a star-like shape that lingered for an average of about 13 minutes. More unusual sightings were reported as well with many resembling spacecraft.

In one such case, two children in Musquodoboit, N.S. witnessed what they later described as a flying hotel. The object appeared to them as an extremely large structure that included protrusions and windows, flying overhead.

Ufology Research, based in Winnipeg, has compiled data on all kinds of UFO sightings since 1989, when they numbered less than 150 nationwide. To date, the organization has collected some 13,786 reports.

Related Topics:deer ufo
Up Next