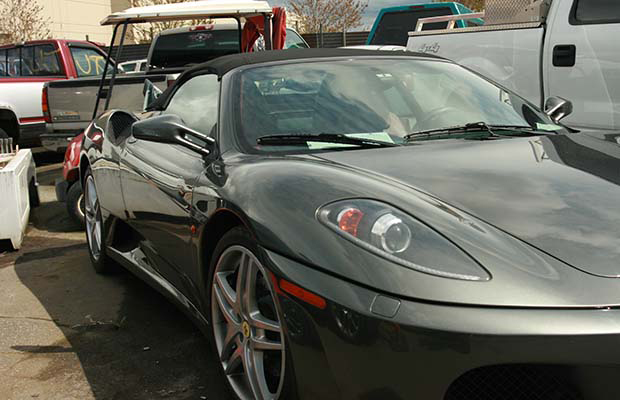 A Langley man had his Ferrari impounded after Mounties nabbed him going 180 km/h at a Surrey intersection where five people were killed in this collision in 2013.
Photograph by: Submitted , RCMP[/caption]

Surrey, British Columbia - On April 19, Royal Canadian Mounted Police impounded the Ferrari of a driver going a full 100 km/h (~62 mph) above the speed limit. At that excessive speed, it would certainly be reckless on an interstate, but the driver was clocked at that speed at an intersection in this Metro-Vancouver city. He was fined $483 for his lead foot driving and will not be able to retrieve his car for seven days. It was only last year that five people lost their lives in a tragic car accident at that very intersection.

Despite the extreme speed, which on some level makes sense for a man driving a 2005 Ferrari F430, Mounties were surprised to find a child inside the vehicle. The child is only 10-years-old and is his son. It was the sheer brazenness of the driver to put the child at such a risk that had Mounties fuming. Cpl. Robert McDonald upbraided the man by asking him if he was aware than an entire family perished in a terrible accident at that same intersection. The insolent driver acknowledged that he knew about it. In the end, Mounties were left wondering what would cause a person to endanger their own child.

The accident in question occurred almost a year this past April 29. The family consisting of the parents and three children drove a Dodge Caravan which ignored the red light ending up killing all the occupants when they collided into another car. The driver was clocked doing 180 km/h (~112 mph) when he flew through the intersection. For what it's worth, the man wasn't even coming close to the top speed that the 2005 Ferrari F430 can reach by a long shot. That car is capable of hitting a speeds of almost 311 km/h (193 mph). The driver was also ticketed $483 for excessive speeding. (Handout)
[/caption]

Source:
Ferrari driver zooms 100 kilometres over the limit with kid in car
http://www.theprovince.com/news/Mounties+impound+Ferrari+zooming+above+posted+speed+limit/9771773/story.html

woman child’s grave: Woman Who Stole Toy From Grave Turns Herself In