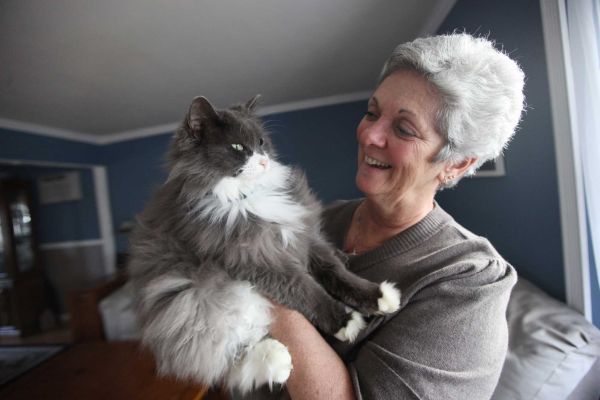 McGee, a cat from Long Island, disappeared from his home three years ago. He was found in Bobby Boyle's front yard in East Eslip after Hurricane Sandy destroyed a huge portion of Long Island.

Boyle took the gray and white long-haired cat to the shelter where technicians were able to find the microchip McGee's owner had installed long before he disappeared.

She put up dozens of missing cat posters after McGee's January 17th, 2010 disappearance, and had even left the cat door unlocked in case McGee decided to return home.

"In December, I went on a bike ride with my granddaughters, and I told them to look for McGee," Lanigan, 64, tells NewsDay. "I was heartbroken."

McGee, who is now five, left an impression on Bobby Boyle, the man who found him. Boyle said he could tell McGee had once been taken care of.

"This is an expensive, nice cat," Boyle remembers thinking when he found the cat. "What is he doing here?"

He originally checked Craigslist for missing cat notices before bringing McGee to the local shelter.

McGee has some adjusting to do now that he's back with Lanigan. Oliver is the black cat that Lanigan got when she thought she might never see McGee again. Lanigan hopes both cats become friends.

“We lived in Sausalito and my older daughter was holding the cat, and somebody had a dog that scared the cat and the cat ran out of her arms,” Gerson told ABCNews.com. “We put up posters and asked everyone in the neighborhood and never found him. But we never gave up hope. I’m a pretty intuitive person and assumed he was still alive.”

Imagine their surprise, therefore, to suddenly have Vanilla reappear in their lives after spending some of that time living in a new home in Noe Valley — six hours away from the Gersons.

Not all cats are lucky enough to live in one good home but Vanilla has had at least two.