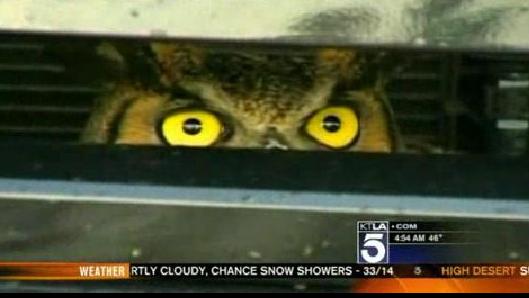 Imagine a Florida driver's surprise when she saw two big eyes staring back at her after inspecting the front grill of her SUV.

Sonji Williams reported that she thought something struck her car while she was driving along a Florida highway, but didn't check out her vehicle until the next day, finding that an owl had slipped behind the grill of her SUV which then served as a cage to prevent the frightened bird from escaping.

“There was a family that flagged me down and said don’t move, don’t move, you have something in the grill of your truck,” she recalled.

After seeing that the owl was alive and appeared to be unharmed although trapped, she contacted officials at the Florida Fish and Wildlife office for assistance.

“I’ve never experienced anything like this before in my life,” Williams told WTVC.

A game warden soon arrived and carefully opened the hood to allow the bird, which was discovered to be a great horned owl, to be exgtricated from his temporary SUV grill cage and fly free again.

Central Florida is home to a large population of great horned owls.

what do you think the story of the owl stuck in the grill? Have you even hit something with your car only to discover later it was still alive?