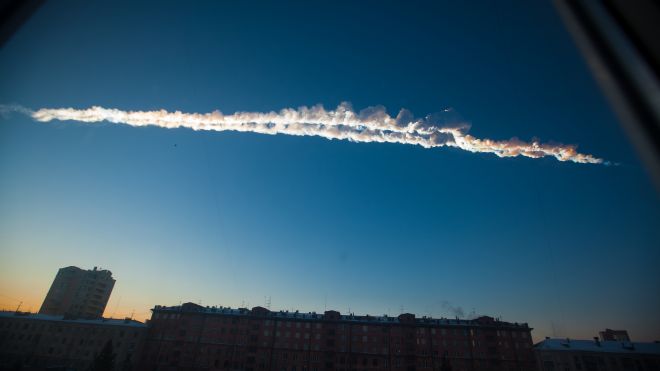 A meteor exploded over a little-populated area of Russia in the morning hours of Friday. Unconfirmed accounts state that an object with a white contrail zoomed across the sky over Chelyabinsk, a little over 900 miles north of Moscow at around 9:20 a.m. local time. A bright flash and a loud explosion seemed to follow.

Reports say more than 900 people have been reported injured, and there are widespread incidents of property damage linked to the blast.

Most of the injuries have been reported to be caused from breaking glass and falling debris due to the explosion of the meteor breaking windows and causing buildings to fall or collapse. Damages have been noted in six cities.

The meteorite was described as partially burning up in the lower area of the atmosphere, followed by fragments falling to the countryside, resulting in explosions as the fragments broke through the lower stratosphere. An astroid is not a meteor until it enter's Earth's atmosphere. After the rock impacts the Earth's surface, it is then called a meteorite.

When the meteorite struck, children were in school, and most Russian residents were at work. Many people were terrified, and confused, not knowing what was happening. Reports quickly surfaced to soothe scared masses.

The president of Russia, Vladimir Putin, has promised aid to all areas affected as soon as possible. The last large scale meteorite event to strike Russia, leveling more than 1200 miles in Siberia, happened in 1908.

"It's proof that not only are economies vulnerable, but the whole planet." prime minister, Dmitry Medvedev said at an economic forum in Siberia, Interfax reported.

Dmitry Rogozin, Russia's deputy prime minister and former ambassador to Nato, took to Twitter to call for an international push to create a warning system for all "objects of an alien origin".

Neither the US nor Russia had the capability to bring down such objects, he added.

Alien-Looking Creature Pulled from Lake May be Lamprey