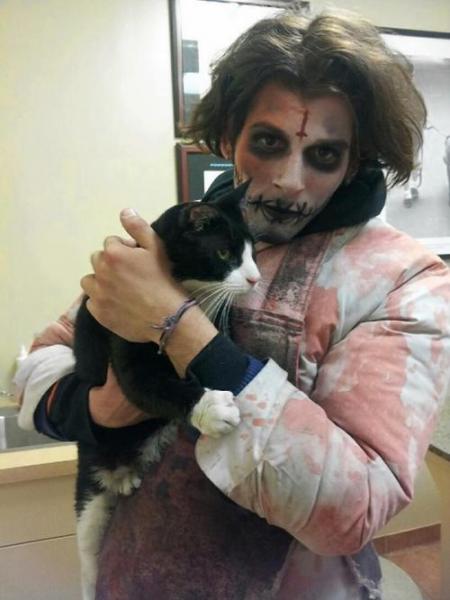 Disaster the cat was recently rescued from the streets of midtown New York City by a good zombie Samaritan, heading home at around 1am after a long day's work.

According to FearNet, while leaving work, he spotted Disaster, a black and white "tuxedo" cat, attempting to cross the busy streets of Manhatten's Times Square.

Zelkowitz says it was clear by how frightened he was that Disaster was a house cat. Zelkowitz managed to catch Disaster and bring him into a local vet clinic where they scanned Disaster's microchip and located his owner, NYPD Officer James Helliesen, 51, who lives approximately 15 miles from New York City in Woodmere, New York.

Helliesen says that Disaster had gone missing over two years ago when he escaped through an open window; he suspected that at this point, someone else had most likely picked Disaster up and taken him in. The last thing Helliesen expected was a phone call saying that his cat had made it 15 miles to "the big city."

"I guess he wanted the bright lights and the big city -- I was shocked to see him," Helliesen told HuffPost Weird News. "I always assumed a neighbor took him in. He's a friendly cat. I thought someone was playing a joke on me when I got the call."

Unfortunately, as Helliesen currently already has nine other cats, he is searching for a new home for his beloved Disaster.