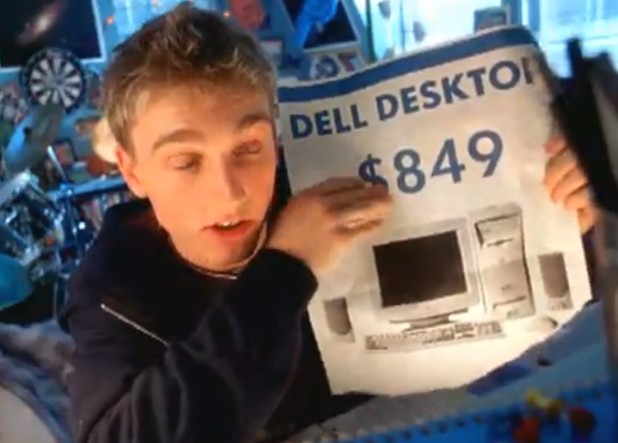 "Dude you're getting a Dell!" was a popular catch phrase of the early 2000s in commercials made popular by the actor Ben Curtis.

Curtis seemed to be taking a cue from Keanu Reeves in "Bill and Ted's Most Excellent Adventures" and enjoyed similar cult status. However, his arrest for possession of marijuana made him the butt of jokes such as "Dude you're getting a cell!" Back in 2003, the negative attention he incurred prompted Dell to drop him as their spokesman.

At the time, the commercials had done their job and Dell was the biggest seller of personal computers. Now, fast forward to 2013, and Dell is in trouble. In fact, the pc maker is in talks to be acquired for the sum of $25 billion.

That may not be necessary though. Ben Curtis believes that he has the solution: bring him back as the Dell Dude.

“I think they’re making a huge mistake and simply need to bring back the Dell Dude!” Curtis told Bloomberg's Mark Milian in an email. “That’s it. That’s all they need to do. If they brought me back, their sales, stock and media presence would skyrocket. That is by FAR the smartest move they could make.”

Perhaps Curtis doesn't realize that consumer PC sales account for only a fraction of Dell's sales with most of the revenue from corporate accounts. Perhaps private buyers might be motivated by the Dell Dude, but large corporate accounts are looking at other factors in their selection of a vendor for PC and server support.

Shark Attacks at Surfside In Texas

36 people shot in chicago Over Weekend