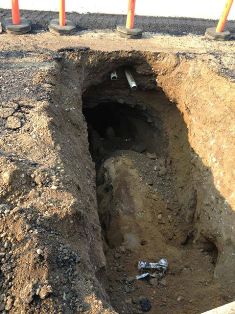 Drivers on I-80 were given a shock on Friday when a sinkhole opened up in the median of the interstate. located near the infamous Donner Pass, the sinkhole expanded closing both directions of traffic, reports UPI.

A spokeswoman from Caltrans, Rochelle Jenkins, explained what they thought to be the cause. A culvert that ran under the interstate had started leaking and dissolved the limestone around it and created a void that collapsed. This is the same basic way that caverns and caves are formed.

The hole was first noticed about midnight Thursday by a state employee and quickly shut down both lanes of traffic. This was a major inconvenience for Californians head to Reno on the east bound side.

By noon Friday the west bound lanes were declared safe and reopen. The east bound lanes are under emergency repair and should reopen later Friday.

Earlier this month, a backhoe sitting at a busy intersection in downtown Montreal fell into a crevice beneath the street level when a gigantic sinkhole suddenly opened up at the corner of St. Catherine and Guy Streets. Officials who measured the huge open pit say that it was approximately 16 feet wide and more than 25 feet in length.

It is suspected that a recent leak in an underground sewer pipe caused the massive sinkhole because Canadian workmen had just begun a repair project minutes before the earth gave way beneath the construction backhoe. All lanes are back open in both directions of Interstate 80 in Truckee, now that a sinkhole in the center median has been repaired.[/caption]

I-80 sinkhole near Truckee has closed lanes
http://www.webpronews.com/i-80-sinkhole-opens-in-california-disrupts-traffic-2013-08