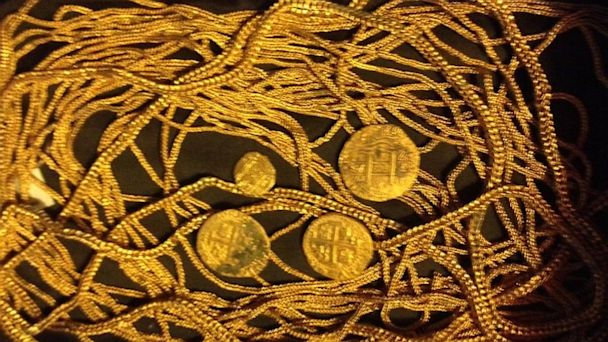 A Florida family found over $300,000 worth of gold treasures off the Florida coast. (Credit: Booty Salvage)[/caption]

A family that treasure hunts together stays together. That must surely be the motto for the Schmitt family of Florida, who has been treasure hunting together for over a decade with thousands of dollars to show for it. In fact, their most recent haul is worth $300,000.

On September 3rd 2013, the Schmitt family found 64 feet of gold chain, 5 gold coins and a gold ring just off the coast of Fort Pierce, reports UPI.

The booty hails from a 1715 ship wreck of a Spanish convoy to Havana. The nearly 300 year old treasure is just a fraction of the reportedly $400 million worth that was lost on the ill-fated voyage. About $175 million has been recovered so far.

The Schmitt family won't walk away with all the booty, however. Twenty percent is automatically claimed by the state of Florida for use in a museum. The rest will be split evenly between the company 1715 Fleet-Queens Jewels LLC, who owns the treasure, and the Schmitt family. Not too shabby for a finder's fee.

Brent Brisben is the co-founder of 1715 Fleet – Queens Jewels LLC. "To be the first person to touch an artifact in 300 years, is indescribable," Brisben told the Sentinel. "They were there 150 years before the Civil War. It's truly remarkable to be able to bring that back."

Schmitt told WPTV that the Booty Salvage find was about more than money.

"It's about the history," he said. "Who wore this. The respect for the person who was in the New World and had this made."

The treasure is believed to have been lost after a Spanish fleet was shipwrecked in a storm on July 30, 1715, according to the Huff Post. Hundreds of people were killed in the storm that gave the area the nickname "Treasure Coast."

This is not the first find for the Schmitt family; in 2002 son Eric Schmitt found a two centuries old silver platter that was worth $25,000 when he was still a high school student. pope reveals fear of being robbed in vatican

Egypt suspects bird of being a spy: Stork Detained By Police