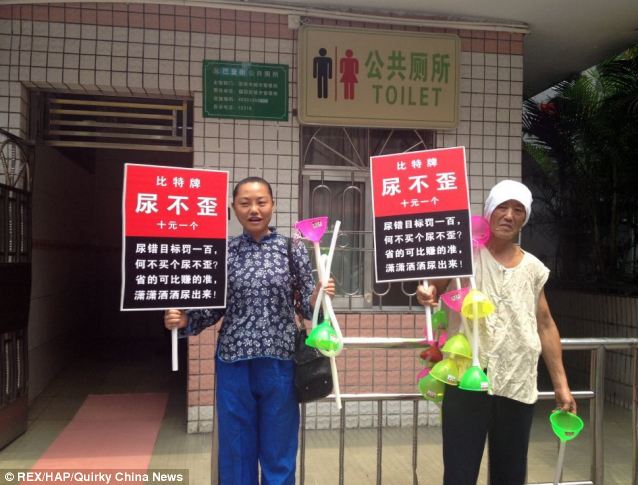 Shenzhen, China - As the adage goes, "necessity is the mother of invention" and it is true in this city of over ten million inhabitants which is situated along the Pearl River delta. The city, which is known as the most unfriendly city in the world, may now be getting a reputation as having the cleanest public restrooms in the world if the latest invention by inventory Ma Xianqing takes hold.

Xianqing has created a unisex one size fits all device to allow both men and women to take directional control of their urination stream when relieving themselves. The device is as simple as it is useful, reports the Daily Mail.

The person needing to relieve themselves puts the funnel device in cupping fashion over their genitalia and their urine streams out the ten inch pipe into the toilet bowl. Voila! No more miss fires that strike toilet bowl rims, floors and walls.

The local government has already created a $15 fine for anyone found misfiring in the toilet stalls. However, Xianqing's device would the problem of misfiring quite easily. There is no word yet on how brisk sales of the device are and whether the city will purchase the pee bong-like device and place them in stalls for assistance.

On The Web:
Take aim: Chinese inventor creates contraption to help you Pee Straight (and yes, it is for women too)
http://www.dailymail.co.uk/news/article-2410376/Pee-Straight-device-created-Chinese-inventor-help-aim-urine.html