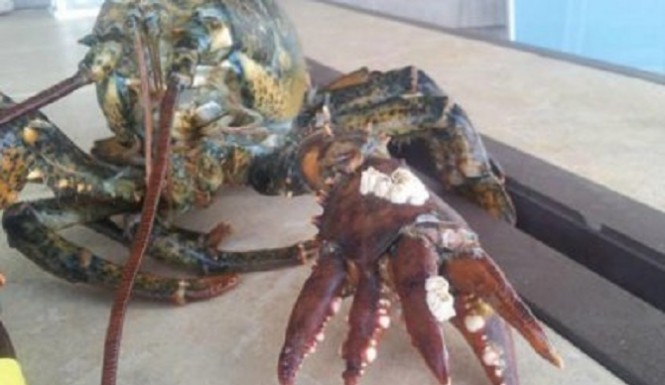 Captain Peter Brown was aboard his boat, the Rachel Leah, just off the coast of Massachusetts when he and the fisherman who hauled in the catch, Richard Figueirido, made their interesting discovery.

Both men decided that the unique four pound lobster was too special to be dropped into a pot of boiling water and cooked for supper and donated the rare lobster, nicknamed Lola, to the State Aquarium in Maine.

Although Lola's claw on the right side of her body is normally shaped, the left side features an unusual claw that has no less than five extensions.

The Maine State Aquarium was selected as the best new home for the six-clawed lobster because it has a history of accepting donations of very rare sea creatures that don't normally appear in the wild.

David Libby, a marine scientist with the Maine Department of Marine Resources told the Bangor Daily News that the four-pound Lola is really a genetic marvel. “Sometimes the genes will just get a little mixed and it will grow a funny claw,” he said. “But I’ve never seen anything like this.”

Among its collection of rare lobsters is one that features two different colors on its shell rather than the traditional red. Lola is currently in seclusion but she is expected to join the other lobsters in the Aquarium's collection so that the public can enjoy seeing her in person.

According to the Inquistr, Lolo was destined for fame as she was caught by Captain Peter Brown and fisherman Richard Figueiredo, whose boat, the Rachel Leah, is featured on the Discovery Channel reality show Lobster Wars.

Fishterman on Canada's East Coast are no strangers to catching odd looking lobsters. Just last year in the Bay of Fundy, one lobster fisherman pulled in a rare orange lobster

The rare catch was saved from the dinner table and put on display at the Alma Lobster Shop.

Orange lobsters are considered the rarest of rare and the chances of seeing one are believed to be one in 10 million.

Check out a photo of the rare orange lobster below. Mugging victim walks 800 miles to get home In Japan