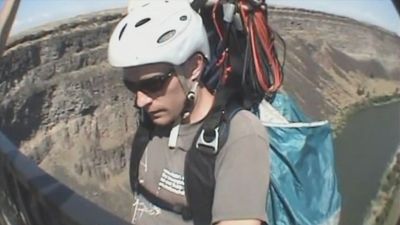 A 35-year-old BASE jumper and skydiver from St. Helena California, Walter Grindle, managed to speak with his wife Danielle one last time briefly before succumbing to extensive injuries after a speed parachute jump from a more than 4,000-foot drop off the south side of Mt. Saint Helena on Sunday.

His emergency beacon alerted authorities that he was in distress. While he waited, he told Danielle he believed he had a broken hip. He died shortly thereafter.

Grindle had plenty of experience jumping from heights, including El Capitan in Yosemite National Park. He also had experience performing amazing feats, such as back flipping during a jump.

Police had previously arrested him for the Yosemite jump. He also had a history of extreme, dangerous jumps. One of those jumps resulted in a head injury during a back flip in January 2012.

Officials are still uncertain as to why he attempted the Mt. Saint Helena jump given that winds in the area are difficult to gauge. During a speed parachute jump, you use the wind to lift you like a kite and then you paraglide to the ground. Officials believe Grindle drifted too close to a rock outcropping. Walden Grindle, 35, left, is pictured with his wife, Danielle, on their wedding day
[/caption] Grindle died after hiking up a mountain with a parachute on Sunday and jumping off the top. Here, he is pictured in a YouTube video posted in 2009 as he is about to go BASE jumping[/caption]

base jumper walden grindle in
http://abclocal.go.com/kgo/story?section=news/local/north_bay&id=9258990

BASE jumper who crashed into mountain made desperate last call to wife 30 mins before he died
http://www.mirror.co.uk/news/world-news/base-jumper-walden-grindle-dies-2297102

BASE jumper who crashed into mountain made desperate last call to wife 30 mins before he died
http://www.dailymail.co.uk/news/article-2430290/Walden-Grindle-BASE-jumper-dies-crashing-Mount-St-Helena.html