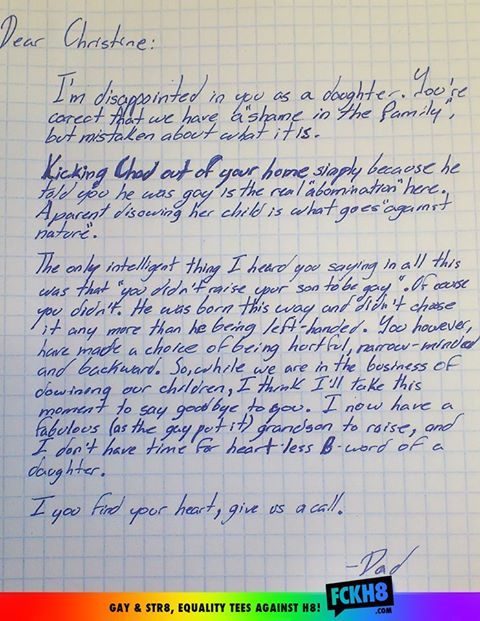 Dad Disowns Daughter After She kicked Out Gay Son[/caption]

A grandfather wrote an incredible, heartfelt letter to his daughter after she kicked out her gay son when he came out of the closet. He intensely expressed his disappointment in his daughter through the letter. He let her know that a parent disowning her child is against nature.

He told his daughter that her son didn’t chose to be gay, he was born gay, just as he was born left-handed. He called her narrow-minded and backward, that she was the, “shame in the family.” He wrote the real abomination is her kicking her son out after he came out.

He also wrote that while they’re in the business of disowning children, he will say goodbye to her. He told her he doesn’t have time for a heart-less daughter and he now has a grandson to raise. He ended the letter by telling her to call them if she finds her heart. The grandfather addressed his daughter’s decision in a very passionate way. He stood up for his grandson.

As more and more young people are coming out, families are supporting them and standing up for them.

The anti-hate group Fckh8.com who posted the now-viral letter on its Facebook page says it sent Chad a t-shirt that reads "Some Dudes Marry Dudes Get Over It," and sent the grandfather a "Straight Against Hate" hoodie. The anti-hate group Fckh8.com who posted the now-viral letter on its Facebook page says it sent Chad a t-shirt that reads "Some Dudes Marry Dudes Get Over It," and sent the grandfather a "Straight Against Hate" hoodie.[/caption]

On its website, the company calls itself a private t-shirt company with a charitable mission to fight homophobia.

"We believe the world would be a better place if good causes had the same savvy marketing as products like iPods, soft drinks and designer jeans," its FAQ says.

Below is the full letter his grandpa wrote to his mom after she apparently disowned her gay son, calling him a ”shame in the family”:

I’m disappointed in you as a daughter. You’re correct that we have a “shame in the family”, but mistaken about what it is. Kicking Chad out of your home simply because he told you he was gay is the real “abomination” here. A parent disowning her child is what goes “against nature.” The only intelligent thing I heard you saying in all this was that “you didn’t raise your son to be gay.” Of course you didn’t. He was born this way and didn’t choose it any more than he being left-handed. You however, have made a choice of being hurtful, narrow-minded and backward. So, while we are in the business of disowning our children, I think I’ll take this moment to say goodbye to you. I now have a fabulous (as the gays put it) grandson to raise, and I don’t have time for heart-less B-word of a daughter. If you find your heart, give us a call. – Dad.

Grandfather Writes Letter To His Daughter After She Kicks Out His Gay Grandson
http://www.huffingtonpost.com/2013/10/02/grandpa-letter-gay-grandson_n_4029750.html