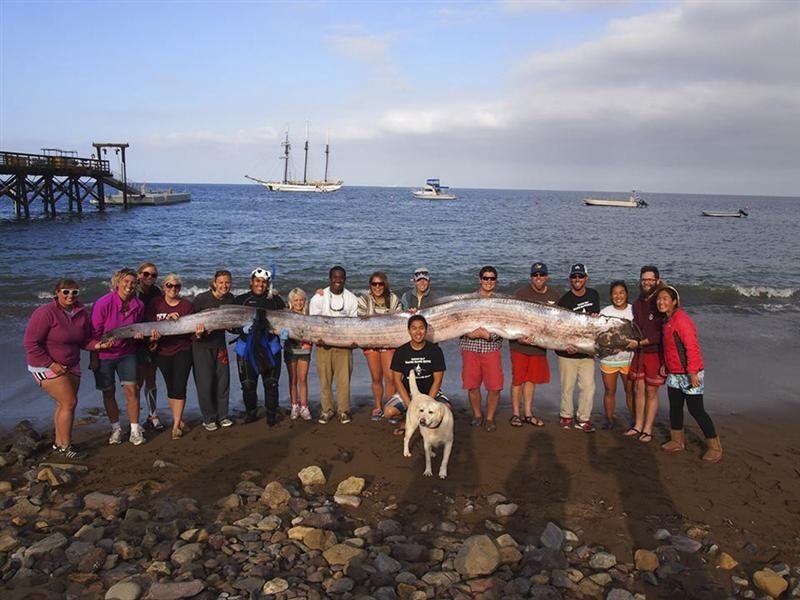 The body of an 18-foot long oarfish, which has the appearance of a mythical sea serpent, was discovered floating off the coastal waters of California by an instructor of marine sciences. It took about a dozen and a half people to help haul in the silvery sea creature, which is more than three times larger than any previously sighted oarfish.

Workers at the facility are calling it a discovery of a lifetime.

Scientists do not get many chances to study these unique denizens of the deep because they live more than 3,000 feet below the ocean water's surface, and they are rarely seen. Hence, this oarfish finding is as intriguing as it is rare.

Although this particular creature likely died of natural causes, tissue samples are being sent to researchers at the University of California, Santa Barbara for further investigation. The scientist who discovered the oarfish carcass while snorkeling off the coast of Southern California says its body will be buried in sand to allow its flesh to completely decompose. Then, the skeleton of the 18-foot long sea creature will be retrieved so that it can be put on display.

The oarfish is among the longest fish that contain bones found anywhere in the world and often grow to lengths exceeding 50 feet. Scientists say their silvery appearance in the water probably caused sailors in ancient times to think they were sea monsters.

Allegedly this Photograph shows US servicemen in Laos during the Vietnam War with a captured Mekong Dragon, Phaya Naga, Mekong Naga or enormously overgrown eel. It is widely circulated in Laos. However, the photograph was actually taken in 1996 and shows a Giant Oarfish, (Regalecus glesne), found on the shore of the Pacific Ocean near San Diego, California. This extremely rare specimen was 23 ft (7.0 m) long and weighed 300 lb (140 kg). The original Photograph can be seen on page 20 of the April 1997 issue of All Hands,[/caption]

On The Web:
oarfish
http://en.wikipedia.org/wiki/Oarfish

£122k: world’s most expensive bottle of wine goes on sale