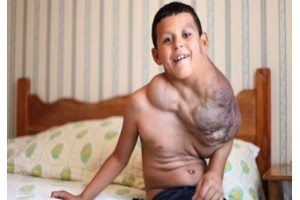 Juarez, Mexico - young Jose Serrano, age 10, suffers from a malformation of the lymphatic system known as lymphangioma. People who have this disorder often have a tumor growth in the area of the head and neck which can grow to an enormous size. In the case of Serrano, the tumor is so large, it extends from his left check down to his left breast.

The lad is at risk of suffocation if the tumor continues to grow because it can choke off air flow in this wind pipe, but the risk of operation at this time is too great. Doctors have begun to prescribe him Viagra in an attempt to reduce the size of the tumor sufficient to allow an operation to be performed safely, reports the Daily Mail.

According to the Huff Post, in September Serrano traveled to New Mexico for treatment at the University of New Mexico hospital. His parents get help paying for his care from a Baptist church in Rio Rancho, N.M.

"Words can express how grateful we are to the people who have helped us," Serrano's mother, Cindy said, according to the Daily Mail. "It's surreal. It feels like a dream come true."

Serrano said he looks forward to a day when his tumor is finally gone.

"If the doctors can cure me I will be so happy," he said. "I would be thrilled. I would be healthy and I'd be able to do anything I want."

While prescribing Viagra to children as means of reducing tumor growth may sound like something a "quack" would suggest, it has been observed to reduce tumors in children. The young boy expressed his hope that he may someday live a normal life once the tumor is removed and promised to be grateful to the doctors who cure him.

The whole process towards surgery was kicked into gear by members of the First Baptist Church of Rio Rancho located in New Mexico. Missionaries from that church found the boy and got his family connected with those who could be of assistance.

Boy, ten, with giant tumour on his neck could be cured with VIAGRA
http://www.dailymail.co.uk/news/article-2497851/Boy-giant-tumour-neck-cured-VIAGRA.html