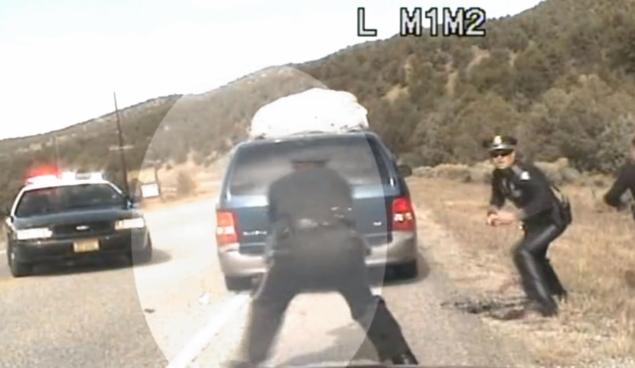 KRQE
The state trooper had pointed a Taser at Ferrell’s 14-year-old son, but can be seen later pointing an unknown weapon at people inside the vehicle.
[/caption]

Two New Mexico State Police officers are coming under investigation this week after allegedly firing several shots into a minivan filled with children aged 6 to 18, according to reports.

The children were traveling from Tennessee with their mother, Oriana Ferrell when she was pulled over by a state police officer who cited her for doing 71 miles per house in a 55 miles per hour zone. According to the police report as the officer went to fill the ticket out Ferrell proceeded to speed off. The officer was able to catch back up and detain Ferrell once again where the stop became more confrontational. Ferrell initially refused to get out of the car which led the officer and his backup to try to forcible remove her. This only made matters worse. Ferrell’s 14-year-old son then proceeded to exit the vehicle and confront the officers where he was threatened with a taser.

Eventually the officers were able to remove Ferrell from the car however, upon hearing her charges she once again ran into the driver’s seat. As she sped away one of the officers reportedly fired three shots. She was eventually detained and faces litany of charges. The officers involved are under investigation for their role in the incident.

Finally, she gets out of the vehicle, and then appears to ignore the officer, and struggles to get back inside. Out comes her son again. This time he scuffles with the officer. He runs backs to the car. The family is locked inside. The officer smashes the window with his baton. As Ferrell drives off again, another officer arrives and fires at least three shots at the van with the five children inside. After a 10-minute, high-speed chase, Ferrell finally stops. She and her son are arrested.

Oriana Ferrell’s lawyer Alan Maestas told Judge Jeff McElroy the police had no reason to shoot at the minivan:

“There was no reason at all to chase her down. She was flat-out scared that something was going to happen to her children. We ought to talk about the stupidity and recklessness of shooting at a car that has five children in it. If someone ought to be charged with child abuse, it ought to be the New Mexico State Police.”

"In many departments, it's against policy to fire at a moving vehicle," Miller said. "Now, the officer later said he was trying to shoot the tires out. The problem is, when you're trying to shoot at a moving car, it's inherently ineffective. You almost never stop the car, and it's also dangerous. If you're firing on a car with five children, you're firing in the direction of two other officers who are in front of the car so, I think, for police, the biggest problem is going to be justifying the use of firearms in what is a traffic stop that's spinning out of control." KRQE
At one point, an officer used a nightstick to break a passenger-side window of the van.
[/caption]

Miller continued: "There's a few problems with the woman's actions here. She's a mom in a minivan with five kids. This is like the picture of a soccer mom. She's getting a speeding ticket and not for going 100 miles an hour, it's 71 in a 55. I don't know anybody who is not doing 70 in a 55 today, but instead...she gets the summons. The cop wants her to pay it right there or go back to court and settle this now, and she drives off, so her first mistake is not dealing with it, and dealing with the officer right there, but driving away."

After watching the video below, who do you think is a blame?