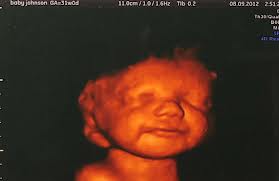 A couple in England thought it best to pursue plans to abort their growing fetus until a 3D ultrasound test made it possible for them to see the smile on their baby's face.

Katyia Rowe and her boyfriend of several years, Shane Johnson, were faced with the agonizing decision of whether or not to abort their child after medical testing indicated that it was suffering from severe development problems with its brain.

Although doctors at Birmingham Children's Hospital counseled the couple that an abortion might be the most humane decision for all concerned, the couple opted for an abortion until viewing their child's first smile as seen on a 3D ultrasound scan.

His mother said that despite the doctor's warnings that her son would never walk or talk once he was born, she decided to change her plans to undergo an abortion on baby Lucien. That smile on her child's face convinced her that it was her responsibility as his mother to protect and prolong his life for as long as possible.

She said: ‘Despite all the awful things I was being told, while he was inside me his quality of life looked to be wonderful and no different to any other baby’s, he was a joy to watch.

‘I was told he would never walk or talk yet the scans showed him constantly wriggling and moving.

‘As I watched I knew that while I was carrying him he still had a quality of life and it was my duty as a mother to protect that no matter how long he had left, he deserved to live.’

Katyia has no regrets in deciding not to abort Lucian, reports the Daily Mail.

“I may only have been Lucian’s mummy for nine hours but it was worth all we went through.

The child was allowed to come to full term and was delivered in late October.

Lucien was placed under special neo-natal care but succumbed within a few days.

Katyia tells The Sun she will remember those moments fondly:

“My son was dying but I couldn’t stop smiling because I felt so blessed, honored and privileged to have the chance to cuddle him, thank him and say goodbye properly after all we had been through together. Of course it is hard without him. I miss him every minute.”

I couldn’t abort disabled baby after seeing my scan... could you?
http://www.thesun.co.uk/sol/homepage/news/4742284/I-couldnt-abort-disabled-baby-after-seeing-my-scancould-you.html

The 3D scan of a disabled baby's smile that convinced his mother not to abort him - and why she is grateful she was able to cuddle him with joy for a few precious hours
http://www.dailymail.co.uk/news/article-2262242/Mother-took-heartbreaking-decision-severely-disabled-baby-aborted-seeing-smile-3D-scan-picture.html