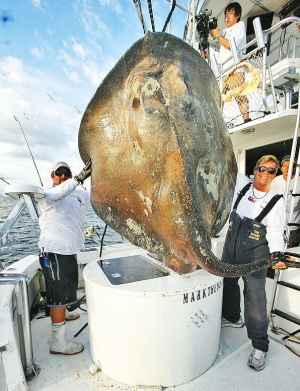 COURTESY MARKTHESHARK.COM
Mark Quartiano — who goes by the name Mark the Shark — said he hooked the 14-foot, 800-pound creature while fishing the waters off Miami Beach.[/caption]

Believe it or not, sea monsters do exist and in a recent fishing expedition off the coast of Miami, fisherman Mark Quartiano had his own encounter with the Loch Ness Monster. Quartiano has appeared numerous times on Discovery Channel's Shark Week, and due to the amount of sharks he has caught over the course of his fishing career, he's often known as Mark the Shark. On this day as a documentary was being filmed for a Japanese television show, he snagged a huge creature of 14 feet in length and 800 pounds. Quartiano said it took four hours for him to reel in.

The creature had the appearance that you would expect to find with most stingrays, but was much larger. It was also covered with barnacles and Quartiano claimed that it was a prehistoric aged dinosaur creature, namely a Dactylobatus Clarkii better known as a Hookstate. That kind of creature is rarely seen due to the extremely low depths it usually inhabits around 1000 feet.

George H. Burgess, a scientist at the Florida Natural History Museum, believes that the creature caught is a Dasyatis Centroura, or a roughtail stingray. Burgess states that those creatures can grow up to about 660 pounds and normally inhabit depths of about 49-160 feet below water.

But The bizarre sea creature might be something else entirely: GrindTV spoke with George H. Burgess of the Florida Museum of Natural History, who identified the beast as dasyatis centroura, a roughtailed stingray that normally grows only to 660 pounds but packs a punch in its venomous tail.

“I’ve caught one like it before, but never that size — not in the last 30 years I’ve been doing this,” Quartiano told ABC News. “It’s a very rare fish. It’s like a big, gigantic whipping stingray. It’s a dinosaur.”

Quartiano said he released the The bizarre sea creature after tagging it.

“Stingrays are usually pretty good to eat, but this one as table fare? I don’t know how that would work out,” he said.