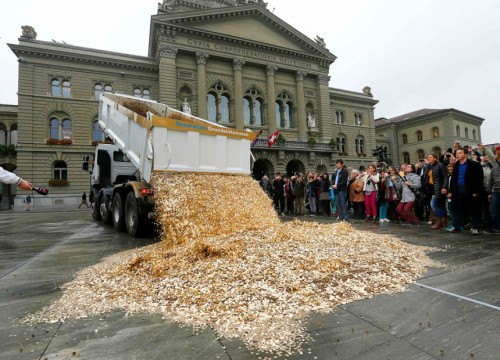 bank vault with eight million coins for sale[/caption]Eight Million Coins, One Bank Vault, Where Do You Want It?

If you have ever wanted to own your own bank vault, today could be your lucky day. There is a bank vault with eight million coins for sale, and they will deliver it to your address. How much are the vault and coins going to cost you? Well, how much are you willing to pay for such a rare deal? The price is open to negotiation.

The Swiss bank vault has around fifteen tons of coins and is worth about 440,000 dollars, give or take a coin or two. The vault is over 100 years old, and the coins are being stored there to represent each single person in Switzerland.

“It is in very good shape and still usable as a bank deposit safe. It will be removed from its original location and be [relocated] anywhere in the world. You'll freely decide what happens with it,” Che Wagner one of the sale initiators told the newspaper.

The coins are handmade from brass and steel, and the bank vault is from around the 20th century.

According to RT, Wagner is a co-starter of the Generation Basic Income Initiative, a group which is fighting for a minimum monthly disposal household income of $2,800 (2,500 Swiss francs) for each working citizen in Switzerland.

The Basic Income Initiative collected the cash earlier this year, which it is now selling along with the bank vault.

In October they dumped all 15 tons - or 8 million five-cent coins - on the square and spread out in front of the Swiss Parliament in Bern to mark the day when some 120,000 Swiss signatories put their names to a petition, also presented by the Basic Income Initiative.

The group hopes that selling the vault will help them to make enough money to take their campaign worldwide.

“The budget of our Generation Basic Income global cultural campaign is estimated at 10 million euros; the amount we'll need to move on with our work to promote the idea of the basic income worldwide and especially in Switzerland, where within three years a national vote [will be] held about the issue,” Wagner said. “This amount will [open up] possibilities of performances like the one with the coins on the national Square in Bern.”

So, now you have a real chance at storing your money in a Swiss account. Not only that, you could be buying some history with the coins and vault. Keeping all the facts and figures in mind, how much are you willing to pay, and where do you want to put your new bank vault? Think about it, who could go wrong with 8,000,000 handmade coins and a Swiss bank vault to put them in?

Meteorite hits Florida Boy, Walks Away With A Few Stitches