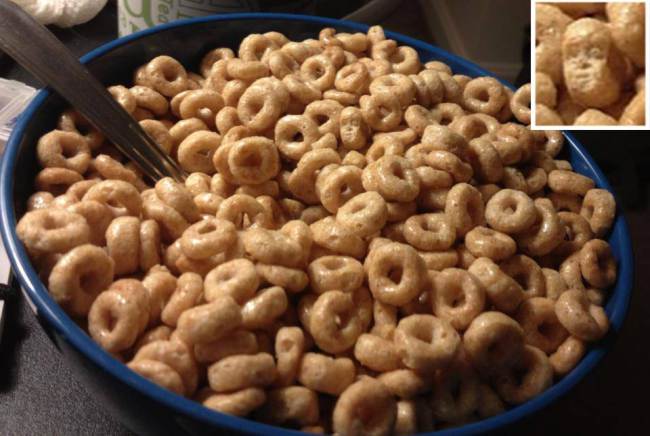 "The day my breakfast tried to eat my soul." A cereal-for-breakfast eater added that as a caption when posting a picture of a ghostly looking image found in her bowl of Cheerios; One of the Cheerios's appearing to have a face among a bowl full of regular looking Cheerios. It was obvious that the cereal eater hasn't experienced seeing any other faces, or haunting images, in a bowl of cereal before.

In case anyone's wondering, the cereal eater did, in fact, eat the Cheerio with the face. "I ate it out of fear that if I didn't it may rise up and destroy the earth." The caption also stated. So, it looks as if this Cheerio cereal eater may have just saved the planet from destruction. It's hard to imagine what the creepily-faced looking Cheerio had planned for ending the world, unfortunately, we will never know now. Unless another one pops up in another box of Cheerios.

Usually when people find strange-looking features in their food, they definitely don't respond with the same kind of sense of humor that cereal eater did. And they certaintly don't eat the haunting image. It's usually met with distress and sometimes the items are even placed and sold on EBay.