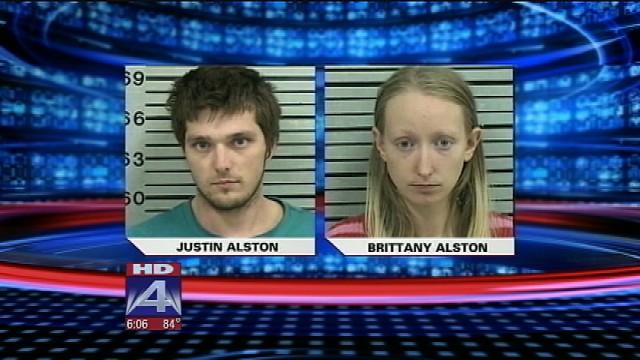 Justin and Brittany Alston sentenced For Starving Their Baby[/caption]

Two Texas parents, Justin and Brittany Alston, have recently been sentenced to serve 60 years in prison for the abuse and neglect of their son. The couple, both 21 years old, starved their young child to the point of near death. The abuse and neglect occurred for months before the baby was discovered.

The baby boy was found by a teenage guest at a party that the Alstons held in their home. The 19-year-old party guest heard soft sounds coming from another room. Upon further investigation, he found the baby covered in filth and his own excrement. An adult was called and the baby, Riley, was rushed to a nearby hospital.

When baby Riley was admitted to the hospital he was found to be severely malnourished. Doctors had grim expectations for his prognosis. He stayed in the hospital for a period to gain strength and nutrients. The baby first received nourishment through an IV and later graduated to being able to eat food normally.

The baby has been placed in foster care. In foster care, baby Riley continues to eat properly and grow.

For their part, the Alstons said that they “had better things to do” than feed their child. Justin and Brittany Alston sentenced For Starving Their Baby[/caption]

Young Couple Gets 60 Years In Prison For Starving Their Baby
http://www.dreamindemon.com/2013/11/18/young-couple-60-years-prison-starving-baby/#kig85zr2zPjGg3x8.99

Russian torchbearer’s jacket catches fire in the city of Abakan