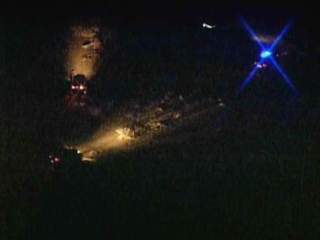 December 4, 2013
ELOY, Ariz. - Two skydivers were killed following a midair collision during a jump over the Eloy, Arizona area on Tuesday, according to officials.

Police Sgt. Brian Jerome stated that witnesses saw the two skydivers colliding with each other about 200 or 300 feet above ground.

Immediately afterward, their open parachutes collapsed and they plummeted straight to the ground. One was pronounced dead on the scene, the other passed away from their injuries at Casa Grande Regional Medical Center. A third skydiver was also hurt and is currently recovering in Maricopa Medical Center in Phoenix, but was injured in an incident unrelated to the deadly collision.

All three skydivers' identities were not released, but Jerome said that the two skydivers who died were not from the United States, declining to name their country of origin. He also said that the cause of the collision is currently being investigated, and that the deceased were also part of a group of 200 skydivers.

Skydiver Andrew Barker, who is a member of the same group, has said that the group plans to continue pursuing world skydiving records in spite of the deaths of the two divers.

"This is one of those things we have to face with the sport, the chance of injury," said skydiver Andrew Barker.

According to the facility's website, Skydive Arizona sits in the center of the Sonoran Desert midway between Phoenix and Tucson. The facility was launched in 1978 by a skydiving couple and it offers the largest drop zone in the world, the site advertises. Teams Arizona Airspeed and Arizona Arsenal offer coaching from SkyDive Arizona.

The cause of the collision is under investigation.

On The Web:
Skydivers die after midair collisionUndeterred, skydivers to pursue records despite deaths
http://www.usatoday.com/story/news/nation/2013/12/03/skydivers-midair-crash-arizona/3864825/

Related Topics:SkydiversSkydivers die after midair collision
Up Next

Dying inmate paroled: Kristina Fetters To Be Released To Hospice