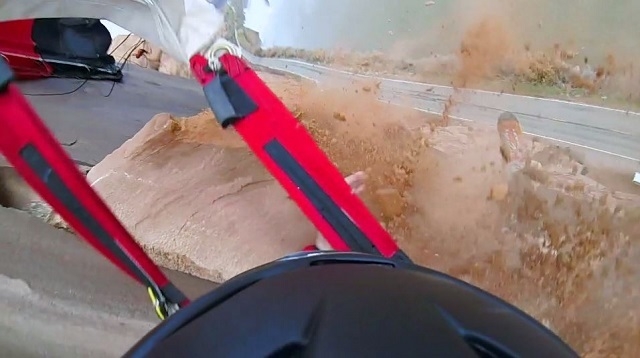 Wearing a helmet camera, base jumper Thayer Healey lost control of his jump and suffered serious injuries. The fact he wore a helmet cam turned the experience into a viral web phenomenon over the weekend. The scary, death-defying crash was filmed on Nov. 24 and released on the web on Friday, Dec. 6.

The helmet cam video captures the rocky encounter between base jumper and cliffside with him crashing and slip-sliding across the cliff while trying to maneuver his parachute. The video was shot in a area just outside Moab, Utah. The video features a slow motion montage of Healey careening into the cliff, then trying to grasp the sliding sandstone to no avail.

Healey wrote comments to the video saying he was severely injured. Those injuries included a fractured T12 vertebra, seriously sprained back, a sprained hand and wrist, and lacerations of the chin and eye. He required five stitches in the injured eye and six stitches to sew up the bad chin.

Fortunately, Healey survived. However, sources report that an average of five people a year die in what some call the world's most deadly sport. Healey's Vimeo page showed plenty of well-wishers hoping for a swift recovery.