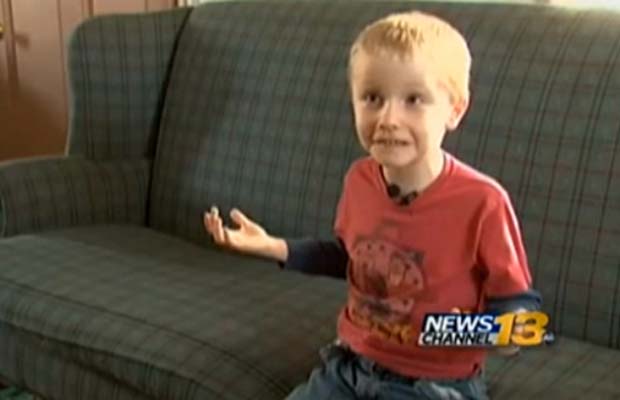 First grader Hunter Yelton told KRDO-TV that he has a crush on a girl at school and she likes him back.
Photograph by: KRDO-TV , ...
[/caption]Does sexual harassment laws apply to a 6 year old boy?

On Tuesday, December 10th, 2013, at Canon City, Colorado, a 6 year boy by the name Hunter Yelton was suspended from school for kissing a little girl on the cheek, because the principal of the school considered such an action as sexual harassment.

Little Hunter was just showing affection to his fellow classmate that he calls his "girlfriend" by giving her a peck on the cheek. And therefore will be suspended from school Monday the 16th of December due to 'sexual harassment.' When a reporter asked Hunter about the act and he replied "It was during class yeah. We were doing reading group and I leaned over and kissed her." And then he also confessed “They sent me to the office, fair and square. I did something wrong and I feel sorry.”

But Hunter's mother Jennifer Saunders wasn't as humble and convinced as her son was, she was enraged that the school took such an extreme action towards these children who were boyfriend and girlfriend. She also claims that her son is now asking questions about sex due to this fiasco.

Unfortunately Hunter Yelton isn't a stranger to school punishment. He has been suspended before, for rough-housing and also for kissing the very same little lady. He mentioned he was trying to be good, and behave but he just has 'too much energy'. Hopefully little Hunter learns his lesson this time, and saves the kissing for after school.

burglary suspect brings toddler along for the heist