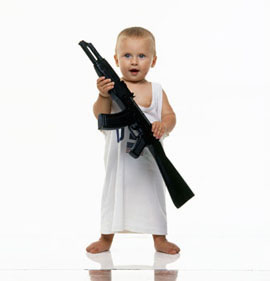 These days it can be hard to find someone reliable to watch your child. With so many oddballs out there a lot of parents are choosing to take their children along with them on errands simply because they don’t think that they will safe at home with a stranger. Apparently that’s how Paul McGraw from Dixon, California must have felt since he took his infant along with him while he and a friend burglarized a store.

Things went downhill however when the burglars got held up at the store and the child remained in the car longer than expected. The Solano County Sheriff’s arrived on the scene a few minutes later and upon searching the car not only found stolen items, but also the child. Now McGraw is facing conspiracy and felony burglary charges and an added charge of willful cruelty of child.

According to local news reports the child was given to Child Protective Services. Somewhere out there is likely one mother that is not too happy with her child’s dad tonight. Next time dad might want to pick a better activity for daddy baby bonding time because this one is likely to land him five to eight.