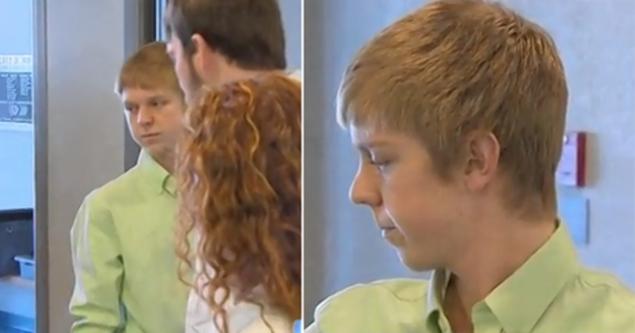 Although Texas teen Ethan Couch's excessive drinking while driving resulted in the deaths of four people, he was handed a sentence of probation for 10 years.

Relatives of the four individuals killed when the 16-year old Couch blacked out at the wheel of his vehicle this summer, including a mother and daughter, expressed outrage and disappointment that Couch will not see one day inside prison. He could have received a 20-year term in the state's prison system but his defense attorneys managed to convince the judge that the youngster was never taught right from wrong by his wealthy parents.

"Money always seems to keep [Couch] out of trouble," Eric Boyles, who lost his wife and daughter in the wreck, told the Star-Telegram newspaper.

"Ultimately today, I felt that money did prevail. If [he] had been any other youth, I feel like the circumstances would have been different."

Couch and several of his friends climbed into his truck for a joy ride in rural Texas after consuming alcohol they had stolen from a nearby Walmart. He lost control of the vehicle during a drunken blackout and managed to not only kill four pedestrians but also severely injure two of his own passengers. Killed: Hollie Boyles, 52, and her daughter, Shelby Boyles, 21, were helping out the driver of a broken down SUV when they were struck and killed by Couch's out-of-control pickup
[/caption]

During his trial, a psychiatrist testified that Couch suffered from "affluenza", a condition caused by his parents who provided him with the best of everything and never taught him about the consequences of his actions.

Dr. Gary Miller, blamed the teen's behavior on his parents, claiming they gave him whatever he wanted including 'freedoms no young person should have.'

Miller called Couch a product of 'affluenza,' where his family felt their wealth bought privilege and there was no rational link between behavior and consequences. He added that the boy had an 'intellectual age' of 18 but an 'emotional age' of 12.

Couch's father said he will pay for his stay in a rehabilitation facility. 5 NBCDFW
Couch was drunk and high on valium when he smashed into a disabled car on the side of a road near Burleson, Tex., killing four people.
[/caption]