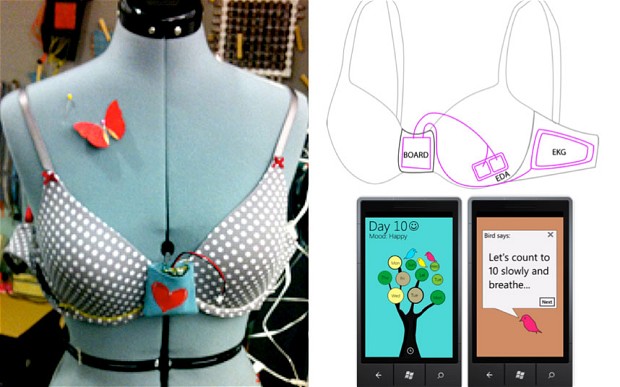 Southampton, England - Scientists at the city's prominent university have designed a special bra fitted with electronic sensors that will track the heart rate and skin condition of women and pass the data to a smartphone application. The app will then detect those moments when the person is likely to eat for emotional purposes such as to reduce stress.

Comfort eating or snacking isn't as harmless as people may think. The added carbs, calories, sugars, and fat contribute to obesity. If a person has an application that can trigger recommendations for deep breathing or other stress-reducing alternatives to food, the person will have more successful weight management.

The prototype bra was designed as part of a study the university conducted called "Food and Mood: Just-in-Time Support for Emotional Eating". The objective of the study was to design practical ways of staging an intervention to break the excessive eating cycle that ensnares many women. It should be noted that thus far, the bra was part of the study as a proof of concept into practical means of getting women to consider alternatives to eating. There are no immediate plans to market the bra at this time. The researchers themselves admit the study is in an early phase of development. The Smart Bra, left, and a diagram showing how the information is fed back to a custom board and transmitted to a smart phone for analysis Photo: UNIVERSITY OF SOUTHAMPTON[/caption]