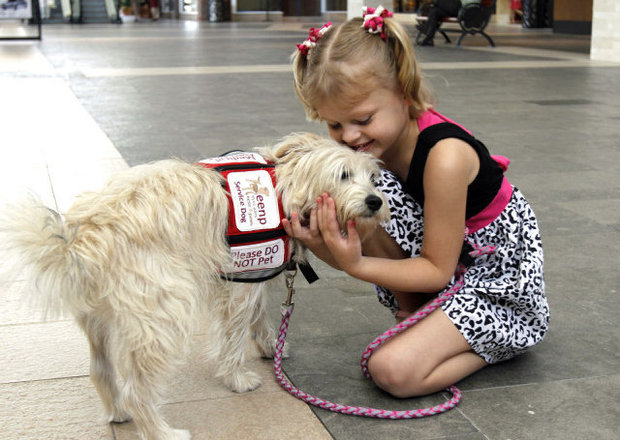 Kaelyn Krawczyk, who has a rare medical condition called Mastocytosis, pets her medical alert dog JJ. They were at the Streets at Southpoint for training Wednesday, June 20, 2012.
[/caption]Service Dog Aids Doctors Before Surgery

On Wednesday, Duke University Medical Center made history by allowing a service dog inside a procedure room before a surgery designed to find the source of his owner's kidney infections.

Dogs are well-known for detecting human distress. J.J.'s ability though is believed to be the first recorded instance of a dog detecting minute body changes and alerting humans of medical problems before they're visibly noticeable. With J.J.'s help, Kaelyn's severe reactions have dropped from four a year to one. Kaelyn's parents are given enough forewarning to take preventative steps before reactions turn severe.

When Kaelyn went under sedation and came out, J.J. was more sensitive than Taicher's equipment. In both instances, he moved in circles to indicate a change in Kaelyn's status. Other than these alerts, prep, surgery and post-op went without a hitch.