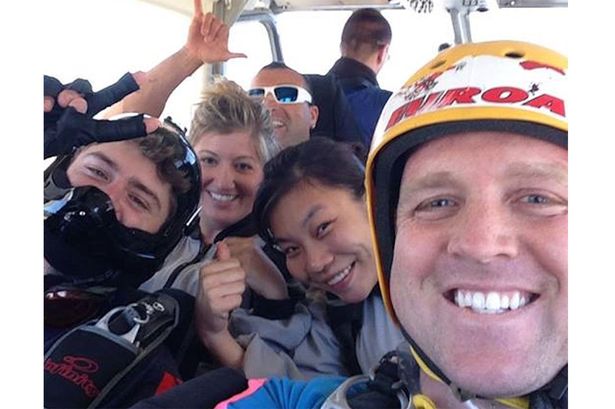 Cherilyn McGraw took this photo inside the plane shortly before her husband Brandon jumped to his death. Photo: Facebook[/caption]

Little did Brandon McGraw and his wife Cherilyn suspect that the trip that she won on the "Ellen DeGeneres" talk show would be his last.

The medical examiner reports that he was pronounced dead at the scene and had suffered a heart attack. The accident is under investigation in Euroa, Australia where the couple had been vacationing thanks to a trip that Mrs.

McGraw won on the popular daytime TV show. Sources say that McGraw was an experienced free-fall diver, so investigators are trying to determine what caused the Marine's death despite what observers say was a descent from the sky that looked flawless.

McGraw was stationed at Camp Lejeune in North Carolina and served as a critical skills operator and gunnery sergeant.

Ian Matthews, who works for Euroa Skydive, told the Jacksonville Daily News said: "McGraw watched his wife do a tandem jump before exiting the plane. He floated for three or four minutes with a good canopy.

"A short time before landing, he suddenly began turning his parachute dramatically to the left and right and eventually crashed into the ground."

His stunned wife managed to thank the many people who expressed their sympathies on Facebook with a posting that acknowledged that her husband was an amazing human being who served as her hero in life. Dream prize: This past January, Cherilyn McGraw (far right) went on The Ellen DeGeneres Show and won a trip for two to Australia after stuffing the most balls into a bag (pictured)[/caption]

DeGeneres said she was aware of the situation.

"I've been speaking with Cherilyn. And my staff has been in touch with her as well," DeGeneres told Us Weekly in a statement.

"She's asked us to help keep this private as she tries to deal with this unimaginable tragedy. I hope everyone respects that," Degeneres continued. Joyous day: The couple married in November 2011 and lived in Huntington, North Carolina[/caption]

"My hero. My angel. These are truly such symbolic photos. He was happy and doing what he loved," Cherilyn McGraw posted on Facebook.

"It's amazing all that photos can capture in a moments time. The last 2 photos taken. I love you more than anything in the world, honey. You are the most amazing man," she wrote.

As a member of the audience, McGraw participated in a game called “Stuff Your Down Under Pants”, which she won. Cherilyn and Brandon McGraw pitcured before his death. Photo: Facebook[/caption]