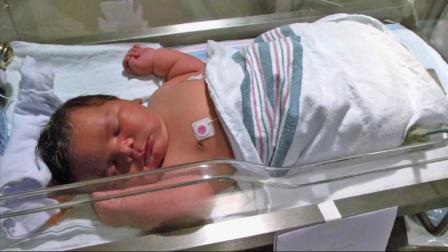 On Friday, December 20, a Florida couple received a surprise when they were informed by hospital staff at Gainesville's UF Shands Hospital that their newborn Isaiah Lawrence Johnson weighed a whopping 14 pounds, 7.6 ounces.

Isaiah's size required that his mother, 30-year-old Nicia McNelley, go with Caesarean birth. McNelley said that she and her boyfriend, Quinta Johnson, had been prepared for him being 10 to 12 pounds, but not more than 14. McNelley joked with a reporter from the Orlando Sentinel that: “It seems like it took them forever to get him out.”

Isaiah's weight posed other initial problems. During breastfeeding oxygen deprivation caused him to turn blue. The hospital had to place him in neonatal ICU on an IV and oxygen for two days. Doctors have also warned McNelley and Johnson that Isaiah's weight puts him at high risk for juvenile and adult diabetes.

Isaiah's weight makes him a Florida state record holder: He is the second largest baby born in the state in 2013.

This first title could be a sign predicting a future holding other titles: McNelley told the press that she hopes Isaiah will become a football player when he grows up.
On The web:

Fla. newborn weighs in at more than 14 pounds
http://www.azcentral.com/news/free/20131224florida-woman-big-baby.html