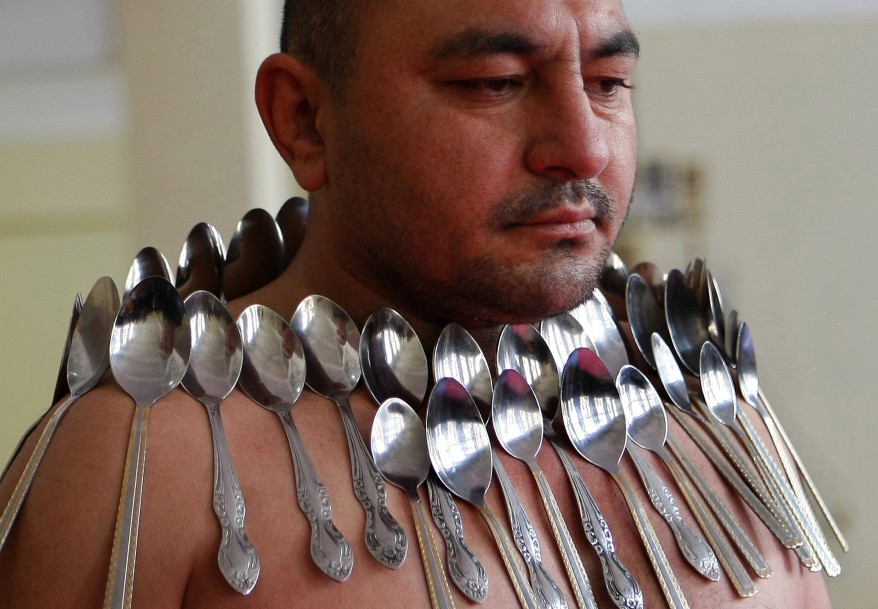 Etibar Elchev is a kick boxing trainer by day, but his true passion is his magnetic personality. Or is it his magnetic persona? The man from the former Soviet Republic of Georgia has outdone himself again. He broke the world record for holding spoons on his body using nothing more than magnetic attraction. Yesterday, he had 53 spoons placed on his bare chest and back which held on by his internal magnetism. Each spoon was placed with the bowl portion pointing upwards and the bottom portion of each spoon's bowl being the main point of contact with his body.

After the spoons were carefully placed on his body, Elchev slowly turned around to display the complete set of spoons on his body. He then walked several paces and again turned around again while pausing for the media to snap pictures of his accomplishment.

Skeptics counter that magnetism by people has more to do with their skin being "sticky" than any actual electromagnetic field. Skeptics make a point that magnetic people attach objects directly to their skin just as Elchev did for his world record. If a person were truly magnetic, the force field would work through a layer of clothing.

Are There Really Magnetic People?
http://sciencebasedlife.wordpress.com/2012/03/14/are-there-really-magnetic-people/