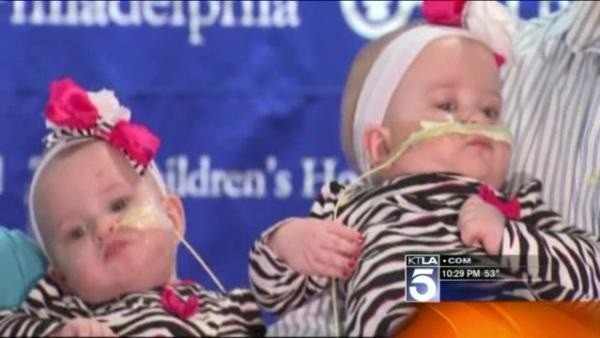 Philadelphia, Pennsylvania - Mom Shellie Tucker rejoices in the blessing of life that her two twin daughters, age 18 months, share after a harrowing surgery to separate the children born co-joined. In fact, it took a team of no less than 40 medical professionals to perform the delicate surgery over the course of 12 hours. That was on Monday, November 12, 2012.

“Seeing them for the first time as two separate girls was really the most amazing feeling,” said Greg Tucker.

However, that is all a distant memory. Day to day, the girls keep their mother on her toes. Shellie says daughters Allison & Amelia only stop moving when they sleep. Other than that, their modus operandi is to split in opposite directions. Perhaps the toddlers have no recollection of their co-joined days in that blessed state that children live in. Their mother recalls all too well which is why she views every day as a gift.

“Seeing the girls and seeing them climb and get in to things, as aggravated as I get I can’t help but laugh because they’re an absolute miracle,” said Shellie Tucker.

“I’m thankful for every single day,” she said. “I can’t describe it.” Shellie describes Allison as the quintessential tomboy who has recently developed a voracious appetite. She still needs the aid of a nasogastric (NG) tube to ingest liquids. Despite the youngster having no inhibition about getting dirty, she enjoys her dolls. Amelia is the soft-spoken gentle one of the twins. She is patient in the things that her sister is passionate about. Amelia is quiet where her sister is very vocal.

In a journal entry on the families Carrying Bridge page, mom writes:

I can't believe I forgot to write here. November 7 was one year since the girls separation. They are doing amazing. They are so sweet and cuddly and have huge personalities. We love them to pieces. It has been a remarkable year for all of us. We have come so far as a family. We can't wait to celebrate the girls first christmas home! It will be amazing! Thank you for all the love, encouragement, support, and most of all the prayers!

It's so fantastic to hear Allison and Amelia Tucker are thriving and growing up healthy.

According to statistics provided by the hospital, conjoined twins occur once in every 50,000 to 60,000 births and about 70 percent are female. Most conjoined twins are stillborn.