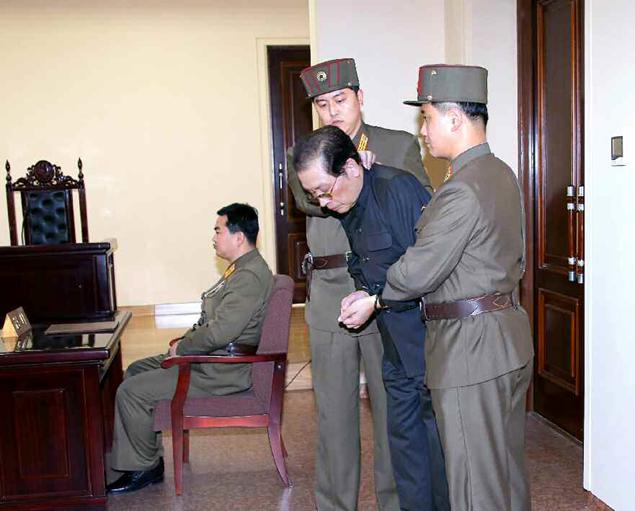 North Korean leader Kim Jong Un has been accused of feeding his uncle to a pack of starving dogs, reports Yahoo News.

This unconfirmed story states that Jang Sog Thaek, the regime's former second-in-command, was stripped naked and placed in a cage with several of his aides. Sources claim that 120 dogs which had been starved for at least three days were given access to the helpless men.

“Then 120 hounds, starved for three days, were allowed to prey on them until they were completely eaten up. This is called ‘quan jue’, or execution by dogs,” according to the Straits Times of Singapore. T

Reports indicate that the men's deaths occurred over an hour later in a process know as 'quan jue' or death by dog. Allegedly, the executions were witnessed by Kim Jong Un himself, along with 300 other high-level government officials.

“The entire process lasted for an hour, with Mr. Kim Jong Un, the supreme leader in North Korea, supervising it along with 300 senior officials,” the Straits Times said in a piece published Dec. 24, 2013, but only now getting traction in the United States.

The victims were “completely eaten up,” the report said.

This is not the first story out of North Korea to feature flesh-eating dogs. Defectors have told similar tales for years.

The source for this story is a piece found in a Hong Kong paper that serves as a mouthpiece for the Chinese government.

However, no other source can be found to confirm the allegations. The paper that originally published the allegations, the Wen Wei Po, has been accused of unreliability in the past. The Straights Times, a more credible news source, has suggested the story was leaked by China. American national security officials have also been unable to confirm these allegations.

Aidan Foster-Carter, a senior research fellow in Sociology and Modern Korea at Leeds University, told the Independent: “I put no cruelty past the North Korean regime, but it does sound extreme even for them. In the recent past, they did have an effigy of the South Korean president mauled by dogs.

“However the killing of Jang Song Thaek has been an episode of state terrorism and the fact they did purge him and it was done so publicly shows that the military and Kim Jong un is trying to warn people not to revolt and how savage punishments can been.

“Although China clearly allows its media and social media to be ruder than in the past this doesn’t mean they are going to stop supporting North Korea.”

American Woman Eats Only Starbucks For A Year: Spent Nearly $7,000