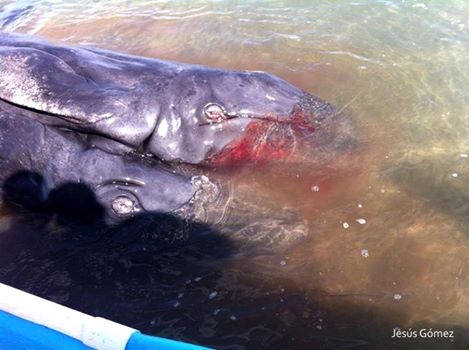 Scientists in Mexico's Laguna Ojo de Liebre, discovered the dead gray whale calves, believed to have been miscarried as a result of their disability.[/caption]

Gray Whale May have Died while Miscarrying Conjoined Babies

According to the Huffington Post, there was a Youtube video posted by Krystian Abundez that showed deceased conjoined whales. The whales are believed to be gray whales because of many of the species traits and the location which the pair was actually found. Researchers stated that due to the small size of the twins, it is unlikely that the mother whale survived the delivery of the whales either.

Gray whales typically travel thousands of miles along the coast of North America in order to give birth to their young at the end of the same year that they initially mated. According to researchers, the young whales are generally at least twice the size of the small whales that were pictured in the Youtube video that was posted by Krystian Abundez.

The Laguna Ojo de Liebre (lagoon where) the whale calves were found in is located on the coast of Baja, California. This area is known to be the birthing grounds of the gray whale species because of the warm climate that the waters provide to the calves upon their arrival into the world. While speculators are unsure of the cause of this anomaly, they are certain that the chance of seeing it happen again is unlikely.

According to NOAA, the Pacific gray whale population numbers about 21,000.
Most calves are born during the last week of December and the first two weeks of January.