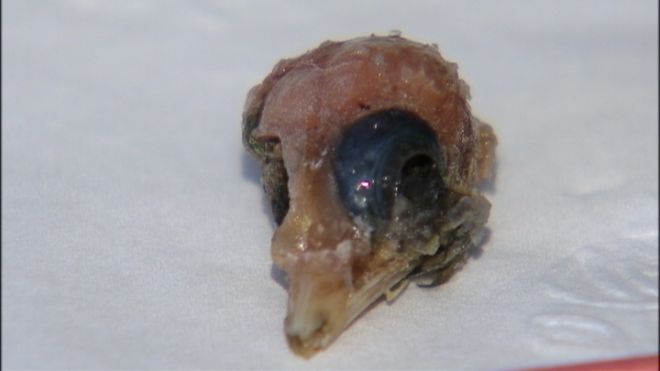 Sarasota, Florida - a woman is claiming to have discovered a bird skull embedded in her package of frozen spinach she purchased from her local Publix grocery store, reports UPI.

The woman says the vomitus discovery was made after she was cleaning up from a spinach dish she prepared for guests for her New Year's Eve celebration.

At the time of the party, Madeline Brogan noticed a peculiar chunk of spinach in the dish and pushed it aside from the rest of the entre. It wasn't until she began her clean up that she began to break up the odd chunk only to discover a bird's skull with one eye in the socket. She believes that either she or one of her guests may have eaten the other eye.

"I picked it up and started pulling the spinach off it and realized there were two eyeholes, and it was a little skull," she said. "I ate that eye, or someone did."

"There's an eye missing out of it," Madeline told WWSB in Sarasota, Florida.

"I would expect a bug, or a natural part of something that grows on the ground, even a pebble or a stick, but not a bird."

Brogan also wrote of her discovery on her Facebook page:

I found a bird skull in a bag of frozen chopped spinach from Publix. Yes, a skull… With one eye, which means the other one was eaten (insert Birdseye brand joke here). I called the store and spoke to the manager. He offered me a refund… Just what I wanted; $1.79 and bird flu. — feeling disgusted.

Publix operates a chain of upper-end grocery stores in Florida and surrounding states. They have been in operation since 1930. The company issued a statement that they are investigating the incident which Mrs. Brogan brought to their attention. Brogan put the skull next to a toothpick to give its size some context. (Image source: Madeline Brogan/Facebook)[/caption]

"We did receive communication from the customer through our customer care department, which was shared with our corporate quality assurance team. They are working through the details with the customer and the supplier. We have not received any additional complaints and believe this is an isolated incident," the store said.

The company has refunded Mrs. Brogan the cost of the spinach. Thankfully for them, she isn't looking for any other form of compensation, but she does expect them to take her claim seriously.

Thus far, Publix believes this to have been an isolated occurrence.

Brogan had purchased store-brand spinach from a Publix location, which is not available in Canada.