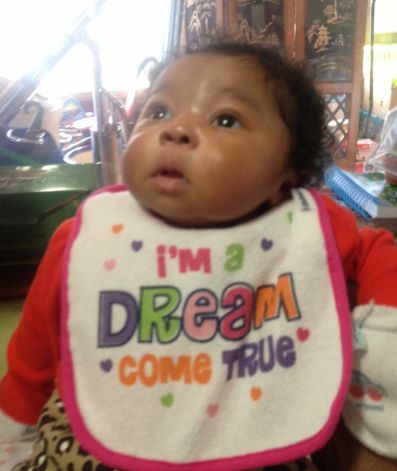 Memphis, Tennessee - Something is just not adding up about what Andrea Walker is telling police in regards to her missing 7-month-old daughter Aniston Walker. According to Mrs. Walker, she left her infant daughter in the care of her 3-year-old son while she ran her 5-year-old son to school yesterday morning. As per the Mrs. Walker, she locked the doors upon leaving the house. When she returned, the 3-year-old was present, but her infant daughter had gone missing.

Next, Mrs. Walker phoned Aniston's father to inquire about the girl’s whereabouts at which time he immediately phoned local police. Here's where things start getting even more curious. Mrs. Walker, knowing that police have been engaged as to her baby's disappearance, once again left her 3-year-old son at home while ran multiple errands around town. She returned an hour later.

Memphis Police Director Toney Armstrong said she is a suspect in the disappearance.

"Realistically, 7-week-old kids don't mysteriously disappear without some circumstances behind it," Armstrong said. "If this was a teenage kid, if this was even a small child of school age, obviously our hopes would be high. But again, 7-week-old children to not have the means to just disappear."

Police have been searching the woods around the house, but in all honesty they admit there is only so far that the child might have gotten on her own. However, if by some freak occurrence she did make it outside, the chances are high that she has perished due to the cold. Mrs. Walker has been charged with child neglect and abuse. Lastly, she is now officially a suspect in her daughter's disappearance.

On The Web:
Police: Mom a suspect in Tenn. baby disappearance
http://www.boston.com/news/nation/2014/01/10/police-charge-mother-missing-tenn-baby/TAoVi7toHkU8m5yKRTDquI/story.html

Two drunks cut off own ears for bet in Moscow, Russia