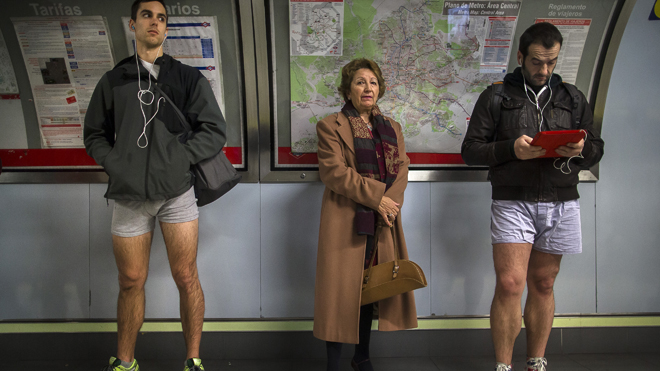 It happens every year and happened again on Sunday, Jan. 12. The 13th annual No Pants Subway Ride took off the pants in more than 60 cities worldwide. More than 4,000 pantsless enthusiasts took over the New York City subway system. London subways saw pantsless people everywhere. One pantsless person boarded an underground train at seven stops in a row always making a poignant point about how he "seemed" to have forgotten his pants

Pantsless people were everywhere. A man stood around a Washington DC Metro chain reading a newspaper in his underwear. Pantsless people held hands in a Mexico City subway station. Madrid residents joined the party along with participants in Bangalore, India. The U2 subway line was packed with people without pants in Berlin along with Potsdamer Plaza station. Women in Sofia, Bulgaria took up the charge, only to confronted by fully-clothed elderly ladies. Paris, Beijing, Hong Kong, Kiev, Brussels, you name the city, people went without pants there.

The No Pants Subway Ride is the brainchild of Improv everywhere. It started as a small-scale punk-out by seven guys who wanted to do something silly. It's spread ever since with the only rule being no pants allowed.