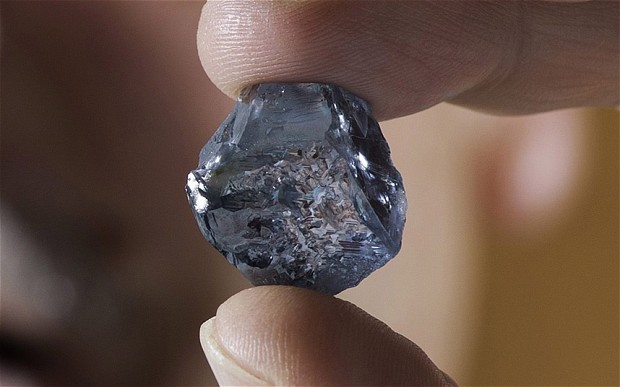 The Cullinan Mine, South Africa - The diamond mine located roughly 40 km (~25 miles) northeast of the city of Pretoria has turned up a rare blue diamond. The stone itself looks like a chunk of translucent blue glass as it were a wedge-like shard. Last year, a large blue diamond comprised 25.5 karats fetched the handsome price of $16.9m (£10.3m).

Now, Petra Diamond, which owns and operates the mine, has announced they have unearthed a much larger 29.6 karat blue diamond, a full 4 karats larger. This most recent discovery is among the most significant diamonds every recovered from the mine made famous for the Cullinan Diamond which had a karat weight of 3106.75. That diamond produced a 530.4 karat polished diamond called the "Great Star of Africa" which now belongs to the Royal family in England.

Petra Diamond expects this latest blue diamond to yield a polished diamond of exceptional quality and size due to its clarity, tone, and vivid blue saturation. The Cullinan mine was purchased by Petra Diamond in 2008 and has a history of turning up high quality blue diamonds. As diamonds go, blue diamonds are among the most highly sought after in the world.