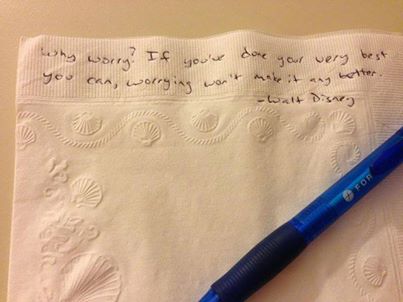 Garth Callaghan, a 44-year-old father who has battled cancer twice over the last few years of his life and is currently fighting against prostate cancer, has made a habit of writing notes on napkins and placing them in his daughter’s lunch box ever since she was in kindergarten. When he first started writing notes for his daughter Emma, she could not read. For this reason he kept the notes simple, sometimes even including pictures and symbols.

“I went to lunch with her at school one day,” Callaghan, from Richmond, Va., told FoxNews.com. “I actually chose to buy lunch with her, and I thought, ‘This is really not delicious.’ So we decided as a family we were going to limit the time Emma bought lunch and make lunch as much as possible.”

Emma, who currently is in the eighth grade, values these notes, and she says that they serve as a reminder for her to not take the relationship that she has with her father for granted. Garth Callaghan realizes that even though he does not currently have signs of kidney cancer, based on his medical history the chances are slim of his surviving past the next five years.

For this reason he has made it his goal to write one letter to his daughter for every single day that she has left going to school. His end goal is to write 826 napkin notes for Emma. Right now he has about 40 more left to right.

“The notes took on more sophistication,” Callaghan said. “I wanted her to be more supported. I really wanted to her have a strong sense of self…. So I started to search out quotes and things that were positive. I was actually spending more time putting together her napkin than putting together her lunch.”

Callaghan keeps all of the notes that he has written for his daughter indexed and on a spreadsheet. Sometimes he will choose words from famous people, or sometimes he will include quotes from people that were influential on him in his childhood.

Callaghan says that his inspiration for writing these daily notes to his daughter came after he read an article about “because I said I would” from a non-for profit company that focuses on the importance of keeping your promises.

Callaghan has posted many of his notes on his Facebook page and on napkinnotesdad.com. Many parents have also reached out to him for advice on how to better connect with their children. Related Topics:Garth Callaghan
Up Next