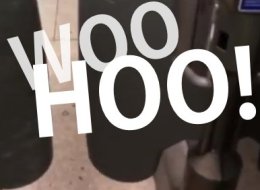 Ticket Barrier Sounds Like David Albarn Singing "Woo Hoo"
[/caption]London, England - It may be the oddest of things, but a ticket barrier at the Canary Wharf station does more than mark an entry point. The squeaky gate just so happens to imitate the vocal refrain of alternative rocker Damon Albarn of the group Blur singing "Woo Hoo" from the 1997 it song "Song 2".

Ritch Ames has alerted rockers to the most unique ticket barrier via Twitter. He said that as people enter the Canary Wharf station the singing gate is the second one on the right. Now, the gate has a following of sorts and may be poised to go viral. It has a YouTube rating of "301+" which portends to possible viral status.

Some rockers think it is all a ploy and that somehow the voice of Damon Albarn is being added. Others have a more humorous take and claim the barrier is sentient and displaying evidence of its existence. As for the For his part, Ritch Ames followed up with a tweet that more security staff would be needed at the venue due to the number of people wanting to hear Ames' voice singing "Woo Hoo" as they pass through the gate.