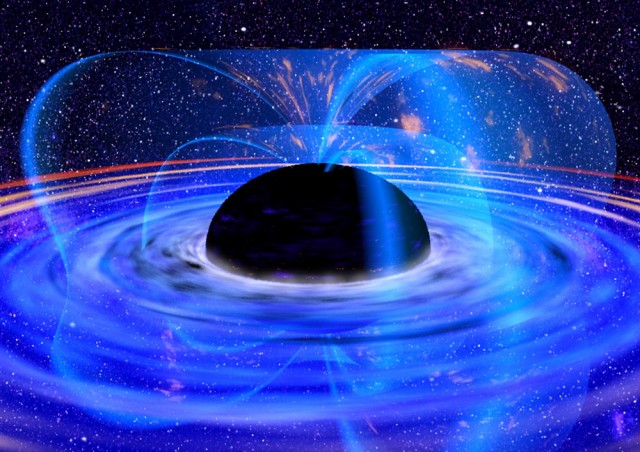 Stephen Hawkings 180-degree Turn on Black Holes Sparks Debate[/caption]British born Stephen Hawking has earned his place in modern physics with his studies in black holes and the "God Particle" or Higgs-Boson particle.

In fact, with the discovery last year of the "God Particle", Hawking was said to be dismayed that the thrill was gone from modern physics. Perhaps that is underscoring his desire to stir things up and add some fresh debate to this important field of science.

Regardless, Hawking has now issued an online study called "Preservation and Weather Forecasting for Black Holes" in which he abandons a key aspect of his 40-year-old theory about black holes which concluded that the space-time continuums had a gravitational pull so strong as to prevent anything sucked into them from escaping, even light itself. He now says under that strict definition of a black hole, they do not exist.

According to the abstract:

It has been suggested [1] that the resolution of the information paradox for evaporating black holes is that the holes are surrounded by firewalls, bolts of outgoing radiation that would destroy any infalling observer. Such firewalls would break the CPT invariance of quantum gravity and seem to be ruled out on other grounds. A different resolution of the paradox is proposed, namely that gravitational collapse produces apparent horizons but no event horizons behind which information is lost. This proposal is supported by ADS-CFT and is the only resolution of the paradox compatible with CPT. The collapse to form a black hole will in general be chaotic and the dual CFT on the boundary of ADS will be turbulent. Thus, like weather forecasting on Earth, information will effectively be lost, although there would be no loss of unitarity.

What difference does it make that the holes do not trap 100% of the light pulled inside? Well, for starters, it was that characteristic that gives them the name "black holes". By saying that not all light is trapped is tantamount to saying the holes are grey holes.

“There is no escape from a black hole in classical theory,” Hawking told Nature. Quantum theory, however, “enables energy and information to escape from a black hole”. A full explanation of the process, the physicist admits, would require a theory that successfully merges gravity with the other fundamental forces of nature. But that is a goal that has eluded physicists for nearly a century. “The correct treatment,” Hawking says, “remains a mystery.”

He proposes that matter may be held temporarily inside the black hole and released in some jumbled form after a period of time.