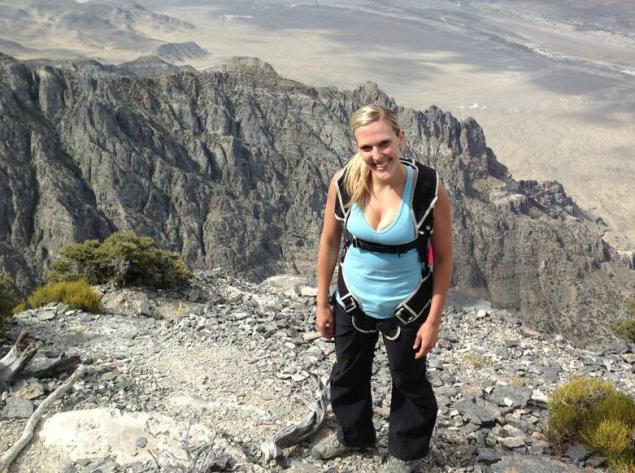 FACEBOOK
Park officials say Bellows is not the area's first BASE jumping tragedy and the practice has been prohibited there.
[/caption]Illegal Jump Ends Short Matrimony

Newlywed Amber Bellows (28) jumped to her death late Saturday afternoon at the Zion National Park in Utah. BASE jumping is illegal in the Park but the experienced jumper decided to risk it with her husband of two weeks, Clayton Butler (29).

BASE jumping involves a leap of faith from an elevated, fixed object. A parachute is supposed to slow the fall but in Bellows' case it did not deploy. Husband Butler realized something was wrong and jumped after his wife. He was unable to rescue her.

Mount Kinesava, the location of this tragedy, is a couple hours hike away from authorities. Butler was not able to reach help until two and a half hours after his wife's fall, and rangers could not recover her body until the following morning. A helicopter was necessary to remove her from the difficult terrain. FACEBOOK BASE jumper Amber Marie Bellows, 28, (right) fell 2,000 feet to her death when her parachute failed. Her husband of two weeks, Clatyon Butler, 29, (left) jumped after her but could not help her.[/caption]

Bellows and her husband were both experienced jumpers. Videos and images of their prior escapades, plunging from towers and apartment balconies, can be found online. Bellows had an impact on the BASE jumping community and her absence will as well.

Jim Milestone, the acting superintendent of Zion National Park, gave his condolences to Bellows' family and friends in a statement he made to reporters. He did also reiterate that this incident is why they do not allow the dangerous art of BASE jumping in the park. Newlywed BASE jumper falls 2,000-feet to her death in front of husband after parachute failed to open
[/caption]

Milestone added: "It is just really sad and our condolences go out to her family and friends.

"BASE jumping is so dangerous. Even for those that are experienced, like Amber Bellows. That is one of the reasons it is not allowed in the park," he added.

Friends and family have posted anecdotes and photos of Bellows on social media to keep her memory and spirit alive.

“Thank you so much for remembering our sweet Amber,” Kelli Bellows Pugh wrote on Facebook. “We are grateful for the thoughts and prayers from our friends and family. Your support and well wishes are truly appreciated. As a family we would like to request that the press and media refrain from contacting us while mourn our loss and heal. Thanks again to everyone for all of your love.”

Bellows is the first fatality. Her death is still under investigation.

The newlywed couple was BASE jumping from the 7,276-foot Mount Kinesava in Zion National Park, Utah, when the tragedy occurred.

Newlywed Base jumper falls to death: Utah Woman Falls To Her Death
http://www.cnn.com/2014/02/09/us/utah-newlywed-killed-base-jumping/

Newlywed Base jumper falls to death: Newlywed BASE jumper falls 2,000-feet to her death in front of husband after parachute failed to open
http://www.nydailynews.com/news/national/newlywed-base-jumper-falls-2-000-feet-death-front-husband-article-1.1608150