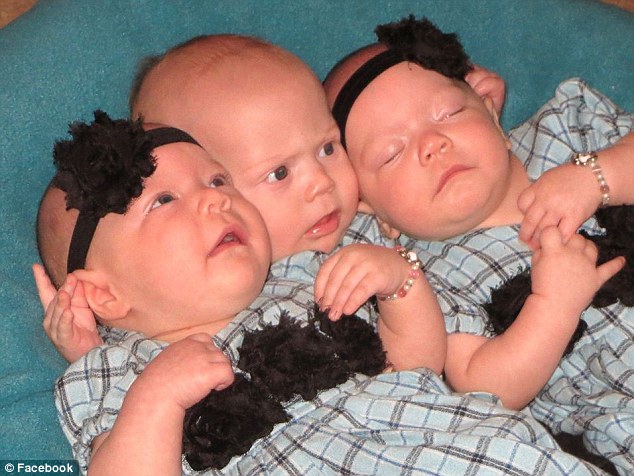 Big family: Tulsa, Oklahoma, couple, Sarah and Andy Justice, pictured wit their brood, have gone from zero children to five in less than a year after they adopted triplets then fell pregnant with twins. [/caption]Couple Adopts Triplets Only To Get Pregnant With Twins

A couple in Oklahoma that was having trouble conceiving children went from news of infertility to having five children in just a very short span of time. Sarah and Andy Justice were told by a fertility specialist that they would need IVF and it would cost them as tens of thousands of dollars. As if the price tag was not too high, they were also told that even after treatment there was only a ten percent chance that they would actually be able to get pregnant.

The odds and price tag convinced the couple to adopt instead even though the wait time to be matched with a baby was extensive. Finally they were matched up with a mother that was interested in giving up her child for adoption, but at the ultrasound it was discovered that the mother was actually giving birth to triplets.

The couple was overjoyed since they knew that they wanted several children and figured this would allow them to skip the adoption process in the future. Surprise: The triplets - Joel, Hannah and Elizabeth - were born premature but healthy nine months ago, and were still in neonatal intensive care when Sarah and Andy had their second surprise. Sarah was pregnant [/caption]

All three triplets ended up premature and spent an extensive nine months in the NICU at the area hospital. However, the couple was thrilled that the baby’s were thriving and while caring for their three adopted children were in for an even larger surprise. While dealing with the reality of finally bring home triplets soon Sarah found out that she was pregnant. Delighted Sarah went in for a sonogram at two weeks only to find out that she was having twins.

The twins were born full term and are now almost eight weeks old while the triplets are just a year. Although the couple admits that they do not sleep much, they said that they are thrilled with the way things have turned out and are delighted with their entire baseball team of children. No regrets: Sarah said even if they knew they'd have their own biological children, they'd never give up their triplets, pictured [/caption]

According to The Daily Mail, friends and family have set up a weekly rotation to help Sarah while Andy is at work and their congregation at Eastland Baptist Church have kept them fed with homecooked meals.